While talking to Italy's Vanity Fair, Paul Wesley (The Vampire Diaries) threw in a thank you to Twilight and Rob for helping him get his current job. 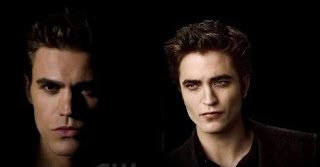 PW: "No, I have only seen a few scenes. But I have to thank Twilight because it gave me a job. Without Robert Pattinson and his films, I do not think that the Vampire Diaries would have been produced"