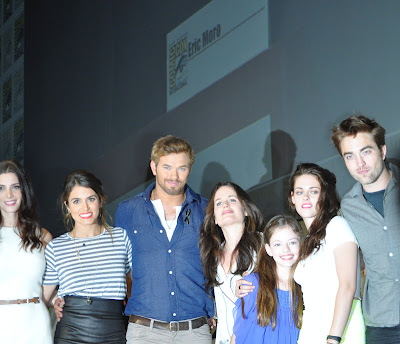 It's hard to believe it's really over. We're guessing the lack of Twilight at Comic-Con won't really kick in until next year, when all those other excited fandoms head to San Diego and we're left behind. But at least we have the memories... and the hope Stephenie Meyer really meant five years instead of fifteen, when she gave a timeline of when she might go back to writing about her family of vampires.

This year it was a mix of emotions at Comic-Con, because of the sudden death of a Twilight fan. But as it always seems to happen in difficult times, fans came together to honor the memory of Gisela Gagliardi who was also remembered during the Breaking Dawn Part 2 panel.


We arrived at Comic-Con just in time for preview night, and then headed straight to Camp Twilight where fans were about to get a visit from 28 Breaking Dawn Part 2 cast members and Stephenie Meyer!


Here are our exclusive pics from that night. The next morning we got up bright and early and headed to the Breaking Dawn Part 2 press conference. First up were the Cullens. The panel was pretty funny. Jackson was excited for his first time at Comic-Con, while Nikki, Kellan, and Peter kept things light. It's nice to see that after all these years, they all seem to have great chemistry on and off the set.

Next up were Rob, Kristen, Taylor, Mackenzie, and Stephenie Meyer. Needless to say we took a lot of pictures. Might have gone a little bit overboard. Just a little.. we're sure you won't mind ;)

Kristen pretty much carried the press conference, answering most of the questions from the press. We'll miss and will always appreciate her passion for Bella. And make sure you go through our exclusive videos because there were some really cute candid moments between her and Rob.

Once the press conference wrapped up we rushed over to Hall H, making it just in time for SEVEN MINUTES of Breaking Dawn Part 2. Heaven. We recovered in time to capture some really great (but shaky) moments, as the cast of Twilight said goodbye to Comic-Con one last time.

We hope you enjoyed our coverage from Comic-Con, hopefully we'll make it back at some point with another project for Rob.