Mexico's OK! Magazine just came out with a 'New Moon' special. And it includes an interview with Rob. No word on when it was conducted, (sometime after 'New Moon' it seems). While some of the quotes are familiar, there are some new ones in there. So I'm translating this part for you, which is the only one that has new information.

"I've been kicked in the butt many times"

It's weird. It's like when I live my hotel after months, just to go
get dinner or do something not that interesting. And it's still talked about. I have a couple of friends from school that live in
Vancouver, and when I went to their house, really something without importance, all of a sudden it was everywhere. It's like the more boring you are, the more you catch people's attention. It's funny.

Do you think it will be hard for you to fall in love, now that you're so famous?

No, I don't think it's an obstacle. It's easy to deal with those types of things (the fame), except when it affects your career. There's people that have no luck, and the media makes sure to make them look like idiots. If this happens, you're never gonna have work, because everyone looks at you like an idiot! You can get angry, but there's nothing you can do.

Can you tell if girls are really interested in you, or your fame?

If they're attractive, I don't care if they're only interested in Robert the actor! (laughs), although I would rather they like me for who I am.

Do you see yourself as an idol?

No, not at all. I know people have said that, but I've never thought about myself that way. The fact that I've never before been cast in roles as the "good looking guy" says something no?

How does it feel to be the fantasy of millions of girls?

It's funny, because I'm sure that if the people outside (the fans), came and sat with me for five minutes, the illusion would be erased.

So you think your fans would be disappointed if they met you?

Of course! they probably would. There's no way to be what people want you to be, because everyone has their own point of view about me. Eventhough people don't really know what they want, they still expect some kind of illusion. The real me is not a fantasy.. I think.

You've said before that during 'Twilight', it took you two weeks to get into character. What about this time around?

I went to Canada about a month before filming started, and I was surprised as how relaxed I was, and how easy it was to get to that place again. Maybe because I connected more with the second book than with the first. I understood the story and the motivations better, because all those emotions I can relate to, in my own life. Like when Edward thinks he's making the wrong decision by leaving Bella, but he still does it. I think every guy would do the same in their relationships. It's like you're obligated to mess it all up!, and I can understand that, because I always mess things up! It's how it happens!

Check out Robsessed for the rest of the scans!

Thanks to Robert Pattinson Source, we have more information on the Madrid event Rob is scheduled to attend, along with Kristen, Taylor and Chris Weitz, on November 12th.

We've translated it for you, so if you use please credit RobPattzNews:

The fan event that we've organized for you on November 12th, will be held at Madrid's Vistalegre Palace, starting at 7:15 pm.

The three main actors of the film: Robert Pattinson, Kristen Stewart and Taylor Lautner will be there, along with director Chris Weitz.

During the event, there will be many surprises including a Q & A with the actors and director.

There will also be clips and an exclusive preview, but the entire movie (NM) will not be shown.

Before the event begins, the actors and director will be signing
autographs inside the location.

Doors will open starting at around 5:15 pm and will close at 7 pm. For security reasons, even ticket/pass holders will be denied entry after that time.

So how do you get your pass/ticket to attend the event? The free passes will be available at the Vistalegre Palace ticket office starting at 10:00 am on November 12th. And note that it will only be one ticket per person.

There will be two types of tickets/passes available. The first 200 lucky fans in line, will get VIP access to the patio, where they will be closer to the actors.

The rest of the passes given out, will be for the stands, and they will be given out until the location reaches full capacity.

In case you don't want to wait in line that day, there are other ways to get a ticket to the event.

There are contests being organized, where the winners will be able to attend the fan event on November 12th.

For now these are two ways to enter for a chance at tickets to the event.

Starting October 27th, if you buy a ticket to watch 'New Moon' starting on November 18th on either of those links, you qualify for a drawing to attend the fan event November 12th.

Each site will give away 500 passes/tickets to the fan event.

Thanks to Robert Pattinson Source we have a first description of new 'New Moon' scene shown at the Rome Film Festival today.

Edward is waiting for Bella at her house, because they need to talk. He tells her he needs to leave Forks because Carlisle is raising suspicions in town.
At first Bella is convinced that Edward wants to take her with him, but then starts realizing that's not the case.
She asks Edward: “What do you mean by “us”?”. He responds: “Only my family.”
Bella gets upset. Tells Edward again that the incident with Jasper was nothing, and Edward answers that is exactly the problem: “Nothing compared to what could have happened.”
He tells her she doesn't belong in his world. Bella answers “Well, that changes many things.”
That is when Edward says line we've seen in the trailer “This is the last time you'll see me.”
Bella tries to convince him to stay, that she's not afraid to lose her soul, but Edward doesn't give in.
The scene ends with Edward leaving. Screen then goes to black and we see Bella fall to the ground.
2 comments:

Hard to believe it's been almost a year, since Rob, Kristen, and Catherine Hardwicke, walked the red carpet on a rainy afternoon in Rome.

They were at the Rome Film Festival to premiere a 20 minute clip of 'Twilight'.

For those of you that missed it, we take a look back at Rob and Kristen's appearance at the festival:

that day in pictures, and red carpet video. Actually makes us wish they were there again.

Look for updates as we cover the promotional tour that kicks off with Rob in Japan November 3rd. Very exciting stuff on the way!
No comments:

We have an exclusive first look at the November cover of Mexican Magazine 15 a 20. It goes on sale today! Of course being 'New Moon', it's all Team Jacob. Can 'Eclipse' get here already?

In case you don't remember, this is last year's November cover.. MUCH better:

Fans who buy this November's issue with Taylor on the cover, also get a free scrapbook. And it even comes with your very own I-am-Bella frame ready to go. 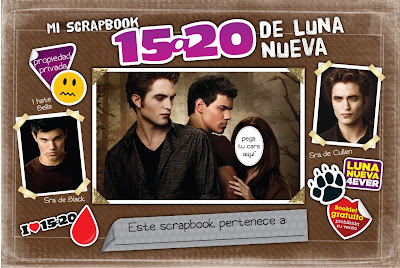 Again, 15 a 20 is on sale now in Mexico.
Thanks Gabriela!
No comments:


As 'Eclipse' filming comes to a close (only a few more weeks to go), last night we were lucky enough to catch some action on the set.

The scene seemed to be set in Seattle, although it was filmed in Vancouver's Gastown. (You can see the black screens up in the back of that picture). 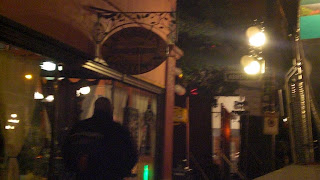 Vancity Allie posted her report along with some pictures earlier in the day, and she was right on target.
There was a rain machine constantly keeping everything wet, along with crew spraying the streets with water hoses.
Eventhough they filmed overnight, some businesses were open.. so we grabbed a great spot at a nearby restaurant, ordered a cappuccino, and enjoyed the view for a couple of hours.
The crew was using a big crane with some flood lights to light up an alley, and we wondered how the people who lived in the buildings were going to get any sleep. Our nice waiter told us they had relocated most residents to a hotel.. question answered.
We watched two scenes before we called it a night. The first one involved a neat stunt that they did a few times.
It involved Riley (Xavier Samuel) being thrown into the air by a person dressed all in black, kind of like a shadow. (Heard on the Twi-gossip grapevine it may be the scene where Victoria turns him into a vampire, but can't confirm).
They had a wire on Riley, so when the person in black who was crouching near the ground threw a kick, Riley would fly into the air and land on his back. Pretty cool stuff. It's supposed to be raining, so every time Riley would fall back they had to dry him out. They then would do the scene again.
The second scene involved Riley (who was dressed in a dark, leather? jacket), talking to a guy in a black hoodie on the street. For this scene, the rain machine was really putting on a storm, so we now understand what David Slade meant by this tweet earlier in the day. And if you saw the picture he posted right before that, you'd know he's been working in those conditions for the last few days.
Which leads up to our chance encounter with him. We had just arrived on set, and were trying to get some pictures before it got dark, when who comes walking out of the set and right into our path.. David Slade!
We said hello, and I introduced myself as RobPattzNews and shook his hand. Told him we retweeted him all the time, and how fans were excited to see his work in 'Eclipse'. He said thank you. We then got a picture together and he went on his way. Really nice guy.. and to think we were afraid of him. From what we've seen and gathered from other set reports, 'Eclipse' is gonna rock!
Our little crappy & quick video of the set.
On a completely different subject, you might have noticed we have a new blog. It's a work in progress, so please bear with us. Thanks!
No comments: