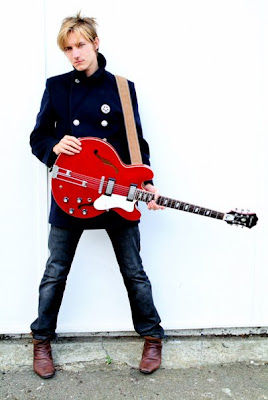 From the first time you meet him, you'll know Lee MacDougall is something special. He'll draw you in with his warm personality, and when he hits the stage his voice will mesmerize you. After dreaming of becoming a musician since he was a child, his hard work is about to pay off as he embarks on his first US tour early next year.

We had the opportunity to chat with Lee and ask him fan submitted questions, plus a few of our own.

Can you share some background/on the lyrics/inspiration/story behind these following songs?

On the surface "She" is very poppy and up tempo, but it's actually quite a dark song with some pretty serious lyrics. I have met a few people who have had to overcome some very serious things in their lives, whether it be bad upbringings or turbulent and abusive relationships, and so they've grown up to be quite insecure about themselves or they have suffered from low self esteem. I just wanted to write something positive and hopeful, it's just a little message to someone saying that even if sometimes you don't feel too good about yourself or you find it hard to love yourself - things can get better and there's beauty in everybody.

'Falling in Love For The Last Time'

I'm sure everyone has been here at some stage or other. Imagine being totally obsessed with someone, but they don't feel the same way. And to make it worse, they know how you feel, but rather than put you out of your misery they play innocent and pretend to be unaware of the effect they are having because they enjoy the attention and being in control. It's a true story about a guy obsessed with a girl and he knows deep down that she is probably no good for him, but he just can't help himself because being with her feels so good. He wants her so bad it makes him sick. I quite like the twist, he's falling in love for the last time both because he knows he will never love anyone else this much, and because it hurts so bad he doesn't want to go through it again!

My friend Robert Pattinson told me about a movie he was making called "How To Be" and that he was to play a guy who was a bit of a super loser. He said the guy wanted to be a singer, but couldn't really sing, and his girlfriend dumps him, and he is just generally a bit lost with his life and doesn't really know where he's going. I thought it sounded really funny, and a good idea for a song, and being both actors and musicians struggling to achieve a higher degree of success at the time, I think we could both identify a little with the character. I said that I was going to try and write the theme tune for the movie based on what he had told me and I went home and wrote it in a couple of days. I went back to his house and played it to everyone and everybody really liked it, so I gave Rob a CD to give to the people doing the movie. Unbeknown to us though, I think the soundtrack had already been selected and I was too late, so it never made the cut. I didn't mind too much because soon after I started to play the song live and it got such a great reaction from the crowd that I just decided to keep it for myself. I always have to tell the story behind it when I play it because people still assume it's about me! The amusing thing is, looking back at it though and how I felt at the time, I think it probably is semi-autobiographical.

You play gigs with Lizzy Pattinson once in a while, but fans want to know if you would you like to collaborate with Rob Pattinson musically in the future and have you ever played together?

Yes we have - but only if you count jamming on the piano in his living room! We've never done an actual gig together, although he did used to come and watch my shows in London. Rob is a really natural musician, he's amazing on the piano - although he always claims he doesn't really know what he's doing, but I think he's just very modest. We have quite different styles, but that can often produce the best results. Of course if the chance ever presented itself to collaborate I think it would be great, and a lot of fun. Would you guys like to see Rob and I collaborate? (Us: Yes please!)

What kind of music are you working on at this moment and what is the significance of it?


All my songs are pretty much true stories, and often quite personal, and I hope significant in the sense that in a time were almost all music is manufactured - people can relate to the honesty and sincerity in them. I'd like to do some more film soundtrack stuff too. My newest song called "Stay" is probably the most haunting ballad that I've written so far and I think that it would be perfect for a movie.

Artist you most look up to and why?

I don't really look up to any artists. I admire talent and determination in people to succeed, but I wouldn't say I look up to anyone. It's just entertainment. I look up to soldiers and doctors and people who devote their lives to helping others and seldom receive the credit they deserve for it.

What are you most looking forward to when you go on Tour in the US?


Everything! The chance to visit so many different places and to meet so many great people. I love US culture too. Just to be able play a song that I've written in my bedroom in a tiny flat in London, all across America in places like New York, Nashville, San Fransisco, and hopefully to have people singing along - that's going to be an amazing feeling.

Can we expect to see you at South by Southwest?


Yes, providing I don't accidentally turn left at Georgia and end up in Disney World - I'm 99.9% certain I'll be playing at South by Southwest.

Is an album on the way and can you give us a preview of what will be in it?

Yes, I'm just putting the finishing touches to an album that I'll be selling at shows on the road next year. It's going to be a limited edition collection of the best of all the demo's and little tales that I've recorded so far. Kind of like a diary of my life since moving to London a few years ago.

Favorite on-stage moment and why?

I did a show with US band Train recently in London. It was sold out, and my biggest show in London so far. Half way through I asked the crowd to sing along. I stopped playing guitar and the whole crowd sang the song back to me word for word. It was an amazing feeling and made the hairs on the back of my neck stand on end.

What makes you smile each day?

My family, my friends. Having the support of so many incredible people. Reading letters from fans. Just being able to have the chance to exist doing the thing I love. I feel very lucky so far.

Finally, do you have a message for fans who you have connected with online and many of which you will meet in person in the coming months?

Thank you to everyone who has supported me so far. It's your support that is enabling me to be able to tour across the USA and Canada, and hopefully Europe too. I'm really looking forward to repaying you all with some fantastic shows and looking forward to saying hello in person as opposed to through a computer screen!

To find out Lee's tour dates and hear more of his music, check out his MySpace. You can also find him on Facebook and YouTube, and make sure to give him a follow on twitter.

See you on tour Lee!