That seems to be the rumor after a singer's tweet from the show last night, that was followed by a photographer's apparent confirmation. Since there's no pictures, we're assuming it was a low key affair and Rob enjoyed the show from backstage. Rob is in Toronto to film Cosmopolis, with production scheduled to begin next week. 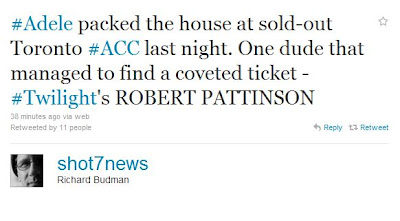 This is a bit of the show last night.. enjoy!

In case you missed, Adele is also a fan of Rob's :)
Adele