So Much Birthday Love For Rob!

While we may not have gotten 'HappyBDayRob' to trend on twitter (we blame the fail whale), the outpouring of birthday wishes for Rob from around the world is.. well, pretty overwhelming.

The public celebration kicked off during Rob's Water for Elephants promo tour, as fans and the Aussie media took time to wish Rob a happy 25th. 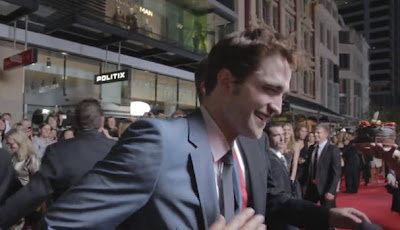 Fans who couldn't wish Rob a happy birthday in person, turned to YouTube and other social networking sites, to send their messages to Rob. This one, made by fans in Russia is our favorite. 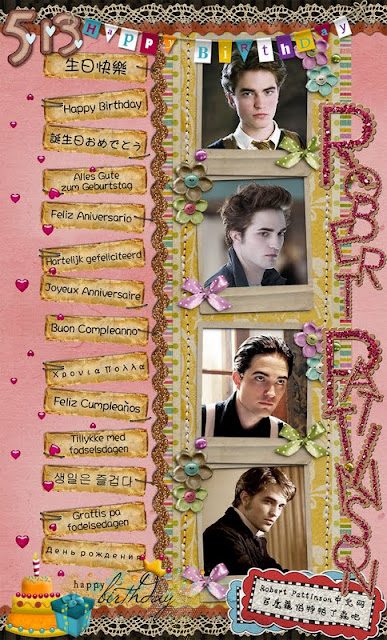 From China
And it took off from there, with the media all over the world celebrating "the one and only".. like Ryan Seacrest's show called him.

The FABLife wrapped their GIF week in honor of Rob, with an extra special post. Here's a preview.. but make sure to check out the WALLS of Rob doing cute stuff, over at their site.

InStyle wasn't left behind, with their stylish post of Rob's hottest red carpet looks (and there have been many recently) to celebrate the big day.

Leave it to MTV to come up with the most outrageous photoshopped pictures of Rob.. ever. Like the one below (just seeing that belt on Rob is making us cry). And of course there's more. With captions. 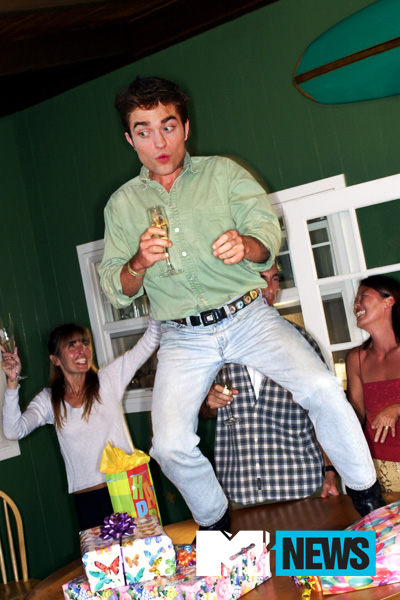 As for PopSugar, Socialite Life, Next Movie, and OK magazine, they went the 'look at the pretty albums' for Rob's birthday. It was the same over at Marie Claire UK, Glamour UK, and Celebuzz. Nothing wrong with that, when there's LOTS of pretty to look at!
Summit had the right idea, by encouraging fans to vote for Rob on his special day 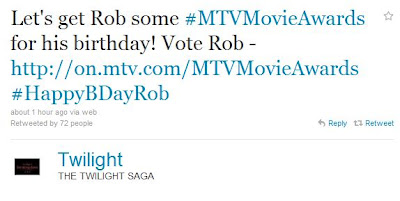 But it was Chris Weitz that knows Rob's fans well, who had the quote of the day!

Make that the next best quote, after The Stir came up with Rob's 25 best quotes in honor of his birthday. Entertainment Weekly talked about the most endearing things about Rob (good read), and OK shared the 25 reasons they love him.. as did PopSugar.

Entertainment Tonight had a clever way of reminding viewers of Rob's birthday.

Access Hollywood went all out, with their favorite clips of Rob and a special message from Shaun Robinson who has interviewed him many times. She also has this hair-touching tradition going with him ;)

Even Buck Hollywood did a little song for Rob.. but take our advice, go straight to 2:20.

Then MTV's The Seven had to go ask random people what to give Rob for his birthday. Not the best idea.. but we did like the second girl's answer.

The Seven - MTV Shows
We want to wish Rob a great year ahead, filled with all that his heart desires. Our gift is to remind people of our commitment to raise funds for the WWF, which Rob has said he supports. We hope you check out our page, donate, or just leave a message for Rob. Hope you had the best birthday Rob!