Press conference (you can find the full video below)


Water For Elephants, it's the title of this huge romantic story, coming out tomorrow on the big screen. As the principal protagonists, Reese Witherspoon and Robert Pattinson, the hero of the Twilight saga who still brings out crowds. He was welcomes by hundreds of fans at the Paris Premiere.

Wherever he goes, it's the same, Robert Pattinson causes hysteria at the premiere of his latest movie, Water For Elephants.

Rob: That was crazy. That was the biggest and most incredible we had on this international tour.

The audience, especially the female one worship him since his vampire role in the Twilight saga. Water For Elephants should make them melt again, with another romantic role. An impossible love story set in the 1930s.

Rob: It must be my thing. It's so weird because in real life, I'm not really romantic. I'm just a normal. I'm not that sensitive to things.

It's true that sometimes he can border on rudeness when he reveals that on the set, he only had eyes for the female elephant. The other star of this movie.

Rob: She's one of the nicest women I've ever met.

Robert Pattinson has an excuse, he loves animals, and since the movie is set in a circus he met more than one. Including a lion for an impressive scene where he gets bitten by it.

Rob: I was just about to put my arm inside the cage when the lion's trainer asked us if my fake arm was on me. When we said yes, he told us the lion is trained to bite and drag the limb inside the cage. I said: 'What?' It was literally 2 seconds before I did it. It was terrifying.

Everybody stays calm, Robert Pattinson wasn't harmed. The lion and the others animals as well.

Translation by Sonia (again) under the cut, plus the rest of the videos out of Paris.

NRJ: There's not just one but a whole load. It's called le mag ciné and it starts now.

Rob: Featured in this magazine...

Small French course for the Hollywood celebrities promoting in our lovely country.

It's neither for the pretty girls or the good wine that they're visiting us, right, Rob?

New movies will be talked about as well as the new dvds out this week.

The movie of the week is without any doubt Water For Elephants. A romantic tale set during the Depression in a circus. We can find the beautiful Robert Pattinson hired in a circus troop, who's going to fall in love with the captivating star of the show, Reese Witherspoon, who's promised to the head of the circus, played by Christoph Waltz.

Rob: Once upon a time, there was a boy who loved a girl ... who loved. Why is my French accent so bad now?


NRJ: Oh it's not that bad, Rob. Three talented actors, all reunited under a big top, surrounding the star of the circus, an elephant.


Reese: We all tried to be her friend. She was super, she was amazing. I worked with her for five months to practise our routine.

In the movie, Rob is allowed to kiss Reese. We took that chance to give us a lesson on movie kisses.

During the casting process, Robert Pattinson was in competition with Channing Tatum and Emile Hirsch. Sean Penn was supposed to play August Rosenbluth, the role went to Christoph Waltz. After Scarlett Johansson turned down the role of Marlena, it's Reese Witherspoon, as a big fan of the book, who decided to join the adventure.

Reese: This sort of work is enjoyable. And I'm talking about the artistic and physical work that doesn't have such a big place in Hollywood anymore. Everything is CGIed now.

Christoph: Someone asked me in Germany the three main reasons why young people should go see this movie. Because it's a tale, a classic. And that's the main reason.

NRJ: A trinity of actors for a story that will make you hold your breath for two hours. If for you the three ingredients of a good movie are, the casting, the love story and a beautiful scenery then Water For Elephants is a smashing hit.

The Twilight saga draws to a close, everyone wondered how the major players in the saga will rebound. If Kristen Stewart is already involved in interesting projects, including On the Road from Walter Salles and Snow White And The Huntsman Rupert Sanders, Robert Pattinson, He confirms with Water for Elephants its image romantic. But the handsome Robert Is just a fop, knowing that we will find him soon in the next David Cronenberg?

While in Paris on 28 April for the premiere of the film Water for Elephants, Robert Pattinson has lingered on the red carpet and told us about how he selected his projects. Does he prefer the mainstream or independent films? The answer below in our exclusive video of Robert Pattinson. Also visit next Wednesday on the show # 135 for the rest of our interview.


Watch this super funny video as the reporter for Premiere France tries to steal a kiss from Rob. They also have some great red carpet coverage. LOL forever.. oy Nick. 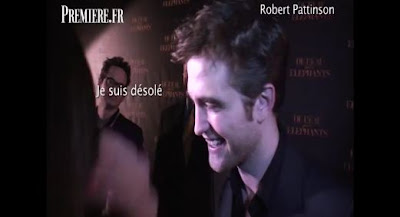 Rob arriving at theater, signing for fans, and leaving

Rob and Reese answer questions about the film.

And don't miss all of the pictures and details from the premiere!