Turns Out Even Mitt Romney Is A Huge Fan

Speaking to the Today show,  Mitt Romney admitted he read Twilight and liked it:

“I thought it was fun,” Romney added. “I don’t like vampires personally, I don’t know any but you know my granddaughter was reading it and I thought, well this looks like fun so I read that.”

You can watch him talk about it below at about :35.

Visit msnbc.com for breaking news, world news, and news about the economy
Romney has been a fan of the series for a while, even asking Rob for a picture when they both were guests on The View in 2010:

Romney wasn't oblivious to the importance of RPatz. Our former gov asked Pattinson to pose with him for this photo backstage, and apparently told the actor that he’s a big fan of Stephenie Meyer's teen vampire series. 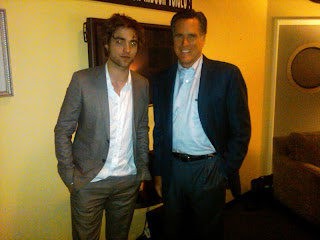 Who knew.. fanboys rock!
Thanks Pattinsonstew :)