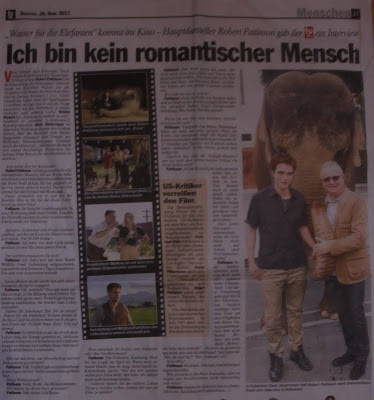 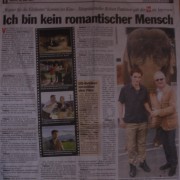 Bibischatzi found this great article on TZ (German newspaper April 26th). She did her best to translate the interview with Rob for us. He talks about his support for the WWF, the day he adopted Bear, and why he could never be a veterinarian. Some quotes seem familiar, but others are new. Great interview.
﻿I am not a romantic person
From a vampire to a veterinarian: After his performances in the Twilight trilogy, Robert Pattinson (24) keeps his image nowadays as the biggest idol in teenage-love being the rosy-cheeked veterinarian Jacob in the new movie "Water For Elephants."

In his private life he seems to go easy on love. When asked about his relationship with Kristen Stewart, Rob said to tz-Hollywood correspondent Dierk Sindermann:

"I like being in love." Does this prove all the rumors about the break-up with Kristen Stewart? Rob confirms:

So you have no time for romance?

Robert Pattinson: In general I'm not a romantic person. When I was 14, I put a flower on the chair of a classmate. She thought it was from someone else. (laughs) I decided that that was the end of me with being romantic.

Let's try it with reality. What's the ideal quality you look for in a woman?

Robert Pattinson: Her sense for independence. In a relationship you risk to blend personalities.

Most of the time it's the kiss of death.

Talking about kisses. There had been a celebrity auction, where a kiss from you has been auctioned. For 20-thousand dollars...

Robert Pattinson: I've never seen any of this money. It was for a good cause.

So for what are you engaged with (what cause do you support)?

Robert Pattinson: I was involved with the World Wildlife Fund, for protecting tigers. They're endangered animals.

Robert Pattinson: Oh really?.. what really is in my heart, is the importance of children to get an education. I would like to join an organization that motivates kids to read books.

Do you have any time for this? Water for Elephants is in cinemas and you're shooting the big final of the Twilight-Saga. Two parts at once.

Robert Pattinson: It feels like I have been a vampire my whole life time. I can't wait to get rid of the make up

and finally to get rid of these bloody contact lenses.

How was it for a change to work with circus animals?

Robert Pattinson: Great. Finally no egos on set. Not even by the biggest star.

Robert Pattinson: No, Rosie, the elephant.

How did you win her heart?

Robert Pattinson: With a lot of Jelly Beans.

Who do you understand better? The elephant or your admirers?

Robert Pattinson: The elephant. Absolutely. Cause there's logic in their game.

If you give her her favorite food, she does tricks.. (laughs) I haven't figured out how this works with my fans.
Maybe you should've become a vetenerian instead of playing as one in a movie?

Robert Pattinson: That would not be for me. As a veterinarian you have to keep the suffering of animals in perspective.

I can't do this. My heart is bleeding. I'm one of these guys who'd adopt a whole animal shelter.
Who keeps you from doing it?

Robert Pattinson: Thank God that Kristen was with me. So we just adopted one dog. A mutt. We called him bear.

If you could be an animal, which would it be?

Robert Pattinson: Maybe a rat. Sometimes I feel like one (grins). No seriously, I want to be a dog. It matches my lifestyle. If I didn't have to stand daily in front of the cameras for 16 or 17 hours, then I would hang around, watch TV and do nothing.

Do you think that the Twilight hype will stop after Breaking Dawn?

Robert Pattinson: All the chitchat surrounding me, has something to do with Twilight.

And that's why it will end after this, hopefully. Because I have a boring life.

You won't have any withdrawal symptoms when the girls stop stalking and following you?

Robert Pattinson: Their love don't belong to me, but rather to a fictional character.

And this confusion goes for all ages. Not long ago a woman followed me in the airport with her autograph pad.

Robert Pattinson: Really. But the 12 year-olds say the same.

How do you assure your girlfriend that she doesn't have to be jealous of all the admirers?

Robert Pattinson: By not sleeping with them. Oh god, that sounded horrible!


Thanks again to Bibi for sharing! - If you repost please credit back. And don't forget that our birthday gift to Rob is to support the WWF. Please check out our donation page and leave a message for Rob!