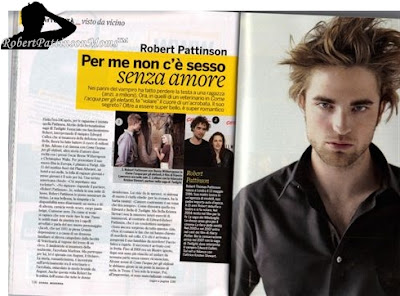 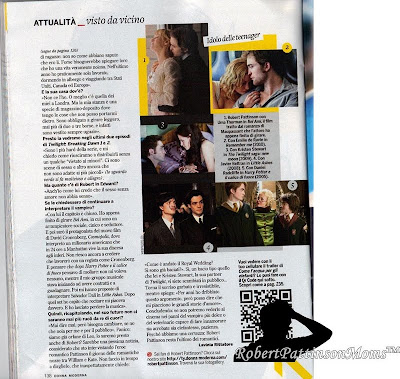 In an interview with Donna Moderna magazine (Italy), Rob shares his thoughts on moving on from Edward, his take on love, and much more.


"I don't have one. Or rather, I have my parents' house in London, but my room has become a sort of warehouse where I leave the stuff I can't take with me. I can't take too many things, 2-3 bags at most. That's why I always wear the same clothes."

"They are the harder movies of the series, and I wonder how they're going to distribute them with a PG 13 rating. There are a lot of sex scenes and so many other things that are not suitable for children" (his look gets mischievous and cheerful)


- How similar are you to Edward?

"We both think sex without love doesn't make sense"


-What if they asked you to keep playing this role?

"That's a closed chapter. I've just finished filming Bel Ami where I play a cynical, seducer, social-climber. Then I will be the main character in David Cronemberg's Cosmopolis. I'll play the role of an American millionaire who, within 24 hours in Manhattan, lives his descent into hell. I still can't believe I'll be working with a director like Cronemberg. And I even wanted to quit acting after Harry Potter and The Goblet of Fire! Nobody wanted me, while my band was starting to sign its first contracts and earn some money. Then I got offered the role of Salvador Dalì in Little Ashes. After that movie I realized I really liked acting and put music aside."


- So you won't play a romantic role ever again?

"Never say never. But I need to change a bit, or either the audience and I would get bored eventually."


Panic: we're already orphan because of Leonardo Di Caprio, will we be orphan because him as well? It would be a bad piece of news since I'm interviewing the romantic hero Pattinson on the romantic wedding day between William and Kate. I don't even have the time to finish the sentence that he asks

"How did the Royal Wedding go? Have they already kissed?"

Yes, the kind of kiss you and Kristen shared in public...And there's back his polite and irresistible smile, as he explains "I've been avoiding this topic for years, but I can say I love big love stories"

Email ThisBlogThis!Share to TwitterShare to FacebookShare to Pinterest
Labels: Press, Water For Elephants