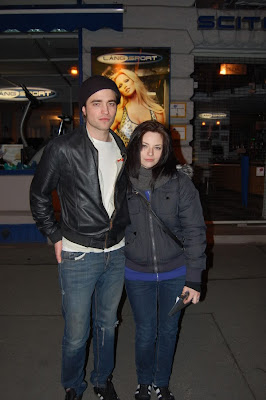 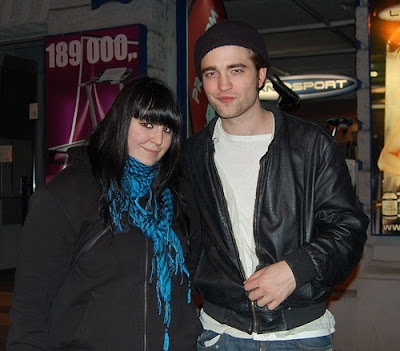 Remember these great pics of Rob posing with fans in Budapest while filming Bel Ami? - as it turns out there is a great story behind them. @alexandra1116 was nice enough to translate what the girls shared about that night:

Summary of cute/funny fan encounter with Rob in Budapest: two girls saw Rob walking down the street with his bodyguards so they went up to him with a "hi Rob!" and the girl says that when he looked at her she forgot everything she knew in English and all she could get out was "autograph and photos" :D Rob smiled and said "sure". So the girl's friend got out her Twilight dvd (which they had with them in case they ran into him while he was here) Rob laughed when he saw it and said "what the hell?" Then there's a whole long bit where the girl couldn't find her pen, and during this time Rob attempted to pronounce the Hungarian word for Twilight (Alkonyat). The girl told her friend to hold the dvd (fogd már meg!) and Rob also tried to repeat this too :D When the girl still couldn't find her pen, Rob reached into his jacket and took out his own pen, only to find that it had run out, so he took out another one but that one didn't work either (lol) so he tried to carve the autograph onto the paper and ended up ripping it. The girl finally managed to find her pen and gave it to him. Rob took it between his teeth to take the lid off and signed the girls' dvds. Then when they were going to take a photo, Rob leaned down and looked at the girl's shoes, grinned and said "we have the same shoes" and they both laughed. Both the girl and her friend took photos with him,thanked him, he said to them "nice to see you" then repeated "see you" again to which the girls said bye and he left.

So that's the story in a nutshell :)