EDIT: Added original source of article and more details. Oh, and per Summit.. it is NOT a new still. Just another screenshot from last trailer.

And as Everglow points out: "it looks like you can see Edward’s crystal heart charm dangling from her wrist too!" 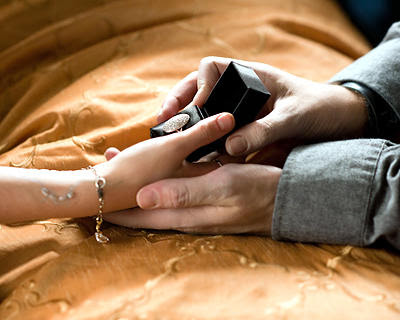 
What kind of a ring does a vampire share with his lady love if he wants to spend eternity with her? We have a peek at the ring that Edward (Robert Pattinson) gives Bella (Kristen Stewart) in 'The Twilight Saga: Eclipse.'


The ring, described in Stephenie Meyer's bestselling books as being Victorian in style, features an oval face set with diamonds.


In the photo, you can also see the charm bracelet described in Eclipse, the novel. Bella wears the bracelet with two charms -- a crystal heart given to her by Edward, and a small wooden wolf that was a gift from Jacob (Taylor Lautner).


In the film, Bella continues her quest to evade vampire Victoria (played in 'Eclipse' by Bryce Dallas Howard), who is bent on vengeance after Edward killed her main squeeze James in the first 'Twilight.' Bella is also confronted with a choice -- does she want to spend eternity with vampire Edward, or will she choose a human life with werewolf Jacob?