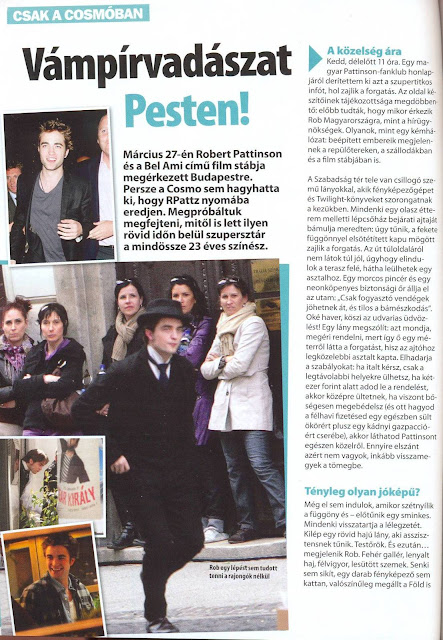 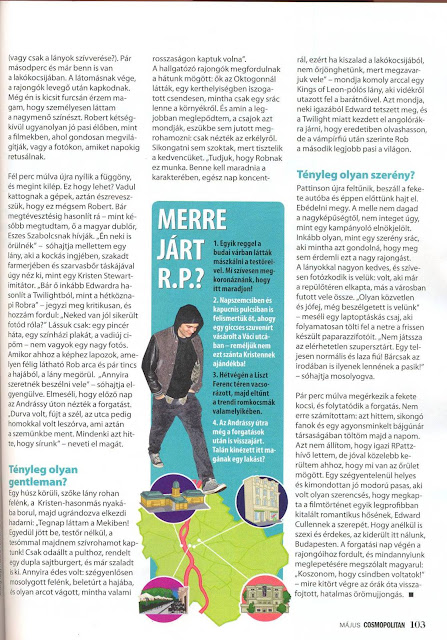 Translated by @alexandra1116. Thank you!

On March 27th, Robert Pattinson arrived in Budapest with the Bel Ami film crew. Of course Cosmo didn’t want to miss out on the opportunity to see him. We tried to discover how the 23 year-old actor was able to become so famous in such a short amount of time.


The Price of Close Proximity

It’s 11am on a Tuesday. From a Hungarian Pattinson fansite, I was able to find out the super-secret information that is today’s location. It is staggering how well-informed the site’s administrators are: they knew in advance when Rob would be arriving to Hungary as if they were a secret agency. They’re like spies: they have people at the airport, the hotels and even in the crew.

Szabadság Tér (Freedom Square) is full of starry-eyed girls clutching their cameras and their Twilight books. Everyone’s staring fixedly at an entryway next to an Italian restaurant: it seems like filming is taking place behind the gate covered by a black curtain. I can’t see much from the other side of the road, so I decide to head to the terrace to see if I can sit down at a table. A moody waiter and a guard in a neon jacket blocks my path: “Paying customers only, no gawking.” Thanks for the polite greeting, buddy! A girl calls me over: she says it’s worth ordering something because she was able to watch them filming from a meter away as she was seated at the table closest to the entryway. She recounts all the rules: if you only buy a drink, you can also sit at the farthest tables, if your order is under 2000Ft (note: that’s about 10 dollars) you get seated in the middle, but if you order a hefty lunch (and leave them half your monthly salary in exchange for an entire ox and a bathtub’s worth of gazpacho) you will be able to see Pattinson from very close up. I am not quite determined enough for this, so I head back into the crowd.

Is he really so handsome?

I haven’t even taken my first step when the curtain opens and... a make-up artist comes out. Everyone’s holding their breath. Out comes a girl with short hair who seems like an assistant. Then body guards. And finally... Rob appears. White collar, slicked down hair, a small grin and downcast eyes. No one screams, not one camera click can be heard, it’s as if the Earth itself has stopped (or just the girls’ hearts?). We get a few seconds, then he’s already in his trailer. The vision is over, the fans are trying to catch their breath. Even I feel a little strange after seeing this famous actor with my own eyes. There is no doubt that Robert is just as handsome in real life as he is on film where they always make sure the lighting is perfect, or on photos where everything gets retouched for days.

The curtain opens once again after 30 seconds and he exits again. How is this possible. Cameras are clicking wildly, then we realize that this isn’t Robert after all. But he looks very similar to him - I later find out that he is the Hungarian double, whose name is Szabolcs Eszes. “I would settle for him too,” sighs a girl next to me, who with her checkered blouse, ripped jeans and leather bag looks like a Kristen Stewart wannabe. “But he looks more like Edward from Twilight, rather than the way Robert normally looks,” she notes critically, then turns to me, “Did you get a good picture of him?” Let’s see: a waiter’s back, a theater poster, my new shoes - I’m clearly not the best photographer. When I get to the photo where half of Rob’s face and a few locks of his hair are visible, the girl’s face lights up. “I want to talk to him so badly,” she sighs weakly. She tells me they watched him filming on Andrássy Avenue yesterday. “It was so windy, and the street was full of sand that ended up in our eyes. Everyone thought we were crying,” she laughs.

Is he really a gentleman?

A blonde girl aged about 20 runs towards us, buries her face in the Kristen wannabe’s neck, then starts to jump around as the words rush out of her mouth: “I saw him yesterday in McDonald’s! He was alone, without any bodyguards, me and my sister almost had a heart attack! He just went to the counter, ordered a double cheeseburger then rushed out immediately. He was so sweet: he smiled shyly at us, ran his fingers through his hair and made a face like we had caught him doing something bad.” The fans eavesdropping behind us turn around: they saw him at Oktogon, he was sipping his drink quietly in a garden, as if he was a normal guy from around the block. And what surprised me the most was that the girls didn’t even think about rushing over to him, they just looked at him from their balcony. They never scream either, because they respect their idol. “We know that this is his job. He has to stay in character, he has to concentrate all day, so if he comes out of his trailer we don’t go crazy because we don’t want to disturb him,” says a girl with a serious expression, wearing a Kings of Leon t-shirt. She travelled to Budapest from the countryside to see him. She says she liked Edward at first and it was because of Twilight that she started to learn English in order to be able to read the books in their original format, but she thinks that after the vampire, Rob is the hottest guy on the planet.

Is he really so modest?

Pattinson shows up again, gets in a black car and is driven away right in front of us. He’s going to lunch. His head isn’t full of his ego, he doesn’t wave like a campaigning politician. He’s more like a shy young man who doesn’t believe he deserves all this love and attention. He is very nice to the girls and is willing to take photos with them: a few were able to catch him at the airport while others saw him out and about in the city. “He was so nice and down-to-earth with us, he even had a conversation with us,” says a girl carrying a laptop case, continually loading all her photos onto the internet. “He doesn’t act like an unreachable movie star. He’s a very normal, very relaxed guy! I wish the men in my office were like him too,” she sighs, smiling.

The black car arrives a few minutes later and the shoot continues. This wasn’t what I expected: I thought I would spend my day among screaming fans and a heavily made-up wannabe actor. I’m not saying that I have now become a real RPattz fanatic, but I have a much clearer view of what is behind all this craziness. An incredibly good looking and very well-mannered guy, who was lucky enough to get the role of Edward Cullen, one of the most romantic characters in recent movie history. I discovered here in Budapest that even without that, he is sexy and interesting. And the end of the day’s shoot, he turns to his fans and to much of our surprise, starts to speak in Hungarian: “Koszonom hogy csendben voltatok” (thanks for being quiet) to which the screams that have been swallowed back for hours finally erupt.

Blue bubble in the middle:

1. One morning he was seen walking around in Buda Castle with his bodyguards. We would give him a crown if it would mean he would stay longer!

2. Even in sunglasses and a hoodie we were still able to recognize him buying fancy souvenirs in a shop in Váci street - let’s hope those gifts weren’t intended for Kristen!

3. During the weekend he had dinner at a restaurant in Liszt Ferenc square, then disappeared inside one of the pubs there.

4. He went back to Andrássy Avenue several times even after they were done filming there. Maybe he’s thinking of getting an apartment there? [personal note: pffft yeah right]