EDIT: translation of interview with Rob has been added

Is this a great picture of Rob or what?.. scans are from Finland’s MeNaiset Magazine. We will add translation when/if we get it. 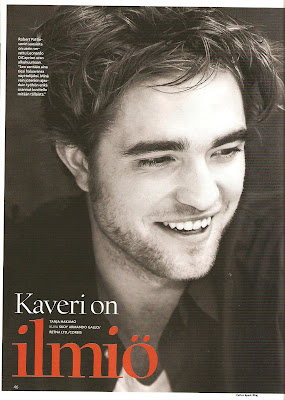 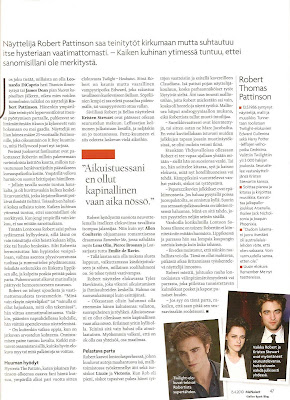 @ah_muse_sings was nice enough to translate the key parts of the article for us (the rest she says, is quotes we've read before)


If anyone knows what it feels like to be Leo DiCaprio, post Titanic fame, or James Dean after his rise to fame, it's Robert Pattinson.
Teenage girls hyperventilating to point of fainting, uncontrollable tears, repeating OMG.
Robert Pattinson- the "It Boy" - hottest Hollywood has to offer. He is forced to leave restaurants through kitchens...
"In a way notoriety feels fun and I enjoy walking in the middle of bodyguards, who dutifully kick people out of the way, but what else can I do? When the screaming crowd surrounds, it feels like whatever I say wouldn't be heard, so it doesn't matter what I say."
Today, in London, Robert is free to speak from the heart, without the screaming, crying or hyperventilating fans. Still, he's frustrated, squirms in his chair, drumming the table. His tousled, messy,sexy hair is under a hat and he's wearing a beard. He answers unsure and finishes answers with laughter.
Robert has made shyness and lack of self-confidence his trademark.
"I stumbled into acting, no intentions toward it and no idea what I was doing."
"It's hard to learn to improve on my acting, when in the spotlight. The pressure is great. Everyone is judging my talent by how well the movie does in the box office sales or what awards it wins."
The Pattz Hysteria began a few years ago, with Twilight. With the third installment coming out this summer and the fourth in production, Pattz fever won't be cooling down for quite a while.
Remember Me- "the role was meaningful as I was involved from beginning to end."
When in the U.S., Robert does nothing in his spare time, a prisoner. He plays guitar, eats and watches movies, whatever you can do in a hotel room. His old friends, sisters or girlfriend take turns staying with him. (does not mention K-Stew by name)
The papparazzi news are not interesting. If you want to stay out of the tabloids, it works if you stay within 4 walls.
At home, in London's rainy Soho streets, he's free to wander, with his hat and beard just like anyone else.
"I didn't remember that it could be so peaceful. It's been fantastic." He wonders if it is because of the indifference of Londoners, or his beard, which hides his recognizable square jaw and thin red lips.
"If it's the beard, then I pray I can keep it for my next role."