A Suave Lookin' Rob On The Cover Of Telerama (France) 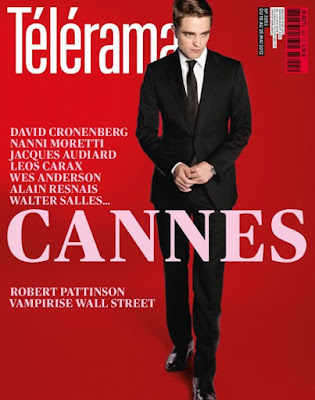 The interview was done in a private club in Sunset Boulevard.

He hid his intense beauty under a baseball cap, a blonde scruff, a lumberkjack shirt, a white tee and washed out jeans. They had the interview on the terrace where he could light up his cigarettes.

Between light coughs and nervous laughs, he explains that he doesn't feel at home here.

His dream is to work in a black comedy of Todd Solodnz or in dramas for men by James Gray or Jacques Audiard.

"I was scared of being cut off from the art-house cinema that I always felt passionate about. I was scared to never be asked to play in anything interesting, that my life would pass and that someone would ask me one day, 'so apart from Twilight, what did you do?'. In this industry, you're easily typecast"

"I never proved anything, I was never fooled by the hysteria that surrounds me. It's the character that I play, Edward Cullen, the romantic vampire. Besides, before the movie was even made, girls would screams at Stephenie Meyer's public readings."

When he got the script for Cosmopolis: He got the fear of the beginner/novice. "I was so scared I would screw this up that I spent a week trying to find a way to refuse the job. And then I told myself that I shouldn't be so stuck-up. My agent was nervous: 'why would you accept if you don't understand it?'. I confessed my confusion to David and he liked it. I think that might be why he hired me. Most actors would have try to act cooler, try to say something smart but I was completely lost."

Cronenberg said that the actor didn't come on set with his hands in his pockets. That he's an assiduous reader, who's been interested in the character of the 'golden boy' for a long while, one who's close to the one he portrays in Cosmopolis. 'Money' by Martin Amis - which describes the giddy heights of easy money and the chic hedonism - is one of his bedtime readings. He finds so many similarities with himself in the empty space of the star system, that he wrote how own version of the novel, in hopes of playing it one day.

"I thought about it for Cosmopolis of course but the characters are too different and Cronenberg prefered that I knew nothing. He wanted me to give in, to say my lines in almost an abstract way, like poetry. It was exciting and a little scary. Today I'm nervous about the idea of having to talk to an audience about a movie that stays dark. But Cronenberg, himself, wanted to have something that escapes him. He would tell me about Fellini and say that a filmmaker that has a goal is dead already. It's so much more interesting than to know right away where an artist is gonna take you. Plus, its' the first time I really like one of the movies I make."

(The article talks about his family, how his sisters dressed him up as a girl, how he did modeling jobs.)

"At the beginning, I was sort of repelled by the vanity of actors. I wanted to write before everything else, but pretty fast I had to find myself. In a humdrum way, acting seemed the best way for me to express what I couldn't say in a different way."

(The article then mentions his role cut in Vanity Fair and Harry Potter. His verve, his arrogance and his disposition didn't offer him many roles. )

"I was at loss, I would do one acting job after the other without any consistency. Thirty euros days job. When I was offered Twilight, I didn't have a choice. It had been three years that my agent in Hollywood would try to find me a job without any luck. Usually, after six months of unsuccessfull search, you're dead in this industry, but she kept believing. I was never fascinated by a role but when I'm chosen I give myself to my character at 150%."

The Twilight saga that was about to eat him whole, will end next Fall.

"I'm curious to reunite with this universe for the last time, to see the effect it will have on me and on the audience. I feel like the frenzy is starting to die down. We step into the era of The Hunger Games, the world wants fresh meat!"

Today Robert Pattinson has five next projects lined up, including one in Iraq. And since he knows that "you only get to have one or two failures before you're forgotten," he speaks about going back to music and writing songs, inspired by Van Morrison's Beside You and Neil Young's Ambulance Blues. He also has in mind the idea of a movie and a TV show, he never gave up on being his own author and to work with determination on the script of an ambitious project - a trilogy of fantasty adventures (and politics), freely adaptated from a successful novel.

"People are listening to me right now so I take advantage of it. I don't think authors last very long in our time and I love this job way too much to let it go away."


Translation of the parts where David Cronenberg mentions Rob

Télérama: How would you present the movie to Rob's fans?
DC: We could tell them that it's story of a vampire on Wall Street. It's almost true, even tho a little deceiving. We can emphazise that Rob is in every scene, that he's sometimes naked and that he has sex with Juliette Binoche. This, the fans won't find in Twilight, it's a more conservative cinema. During the filming of Cosmopolis? Tons of girls were waiting o, set, in the streets, at any hour of the day and night. They had made t-shirts with the strange gun from the movie and the name 'Nancy Babich' that served as code to use the weapon. It was really cute. As were the internet websites about Cosmopolis, that Rob's fans made when the movie got greenlighting.

David talks about a character at the beginning of the movie - a 19 year old businessman - who says his career is over and that he can't face the abstraction of capitalism from today.

Télérama: What about you, can you face it?
DC: I reveal nature in concrete terms. Cinema is not an abstract art. everything should be embodied in characters. Eric Packer, that Rob plays, represents the triumph of capitalism pushed to self-destruction. Many people think today that it's going to eat itself, to explode or to implode. My movie doesn't talk about this, but I can't tell Rob: 'You're the symbol of a self-destruct capitalism.' He can't play it like that. He has to play a character. The cinema is forced to be, in a certain way, extremely realist and I like that.