Okay, now the interviews are REALLY starting to come in. We're trying to keep them all organized so you don't have to go post by post in search of them. Part 1 //  Part 2 (and there are some really good ones in those previous posts).


Rob talks with STV about not understanding the plot of Cosmopolis.

Click the screen cap to watch at the source. 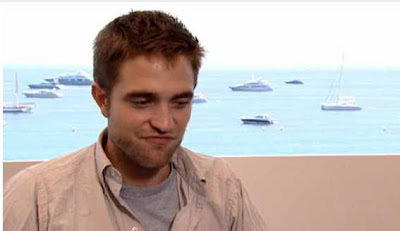 
Rob says he's quit smoking in this interview from Cannes. So great. We hope he keeps it up :)

Shortlist (preview) - Rob talks about types of films he wants to do. READ HERE.

Robert Pattinson returns to the big screen, but not like a vampire. The actor stars in Cosmopolis, the film by David Cronenberg that competes for the Palme d'Or tonight. Maria Molina spoke to him.

Hi, we'll we've been with one of the most famous men of the moment, Robert Pattinson, who we remember for his vampire role in the Twilight Saga, and idolized by millions of teenagers. He now arrives with a completely different type of film. In Cosmopolis he plays a multi-millionaire who crosses the whole city in search of a haircut.

Q: Why do you feel a connection with this character in Cosmopolis?

Rob: I thinks it's about someone who is looking for a different reality, the world that he has in front of him doesn't really exist and it's not the same as for other people.

Q: How about the Hollywood world, is it also a kind of real world?

Rob: The film industry, I love the people, I like them however they are. The fact that no matter how strange or how crazy.. they have a story to tell.


Rob's intro:
It's a strange movie, people will find him petty important referring to the contemporary society but while we were doing it, it seemed totally surreal. Every actor that would come on the set was like 'What is this about?' and no one knew. That's my biggest fear when it comes out, that people won't get it.

Favourite movie:
R: 'One Flew Over the Cuckoo's Nest'
K: 'A Woman Under The Influence' by John Cassavetes. It really influenced me.

Movie that always makes you cry:
K: 'A single man'
R: Gotta say 'One Flew Over the Cuckoo's Nest' again.

Movie that always scares you:
R: Oh god, I don't know. 'The exorcist' or something like that.
K: Movie with people going crazy. That's frightening. For example 'Take Shelter', so good.

Movie that sexually excites you:
K: On the Road?
R: This is a tough one.
K: That's a tough one!
R: That movie called, my French accent is awful, 'Prenom Carmen', a movie by Godard. Actually I liked the main character.
K: Gosh, 'Unfaithful'. The whole movie! And also Diane Lane is one of the sexiest women on earth.

'Rob, is it true, as you said to VF, that you are ready to go and live with kristen?'
K: What?
R: Ehm, I read it and thought 'What is this interview?! I don't even remember doing it.' - But yeah, that woman kept making questions only about that and I was like 'What is going on here?'
I always try not to talk about my personal life and she basically said 'Oh, I would like to ask you about that!'

K: We are so proud of each other. And it's so crazy to be here together.
R: Yes, it's crazy having finished Twilight this year. It's very strange and incredible for both of us.
K: I can't wait to see his movie.
R: I hope you enjoy Cosmopolis, in Cinema Today. And I hope you like it and maybe see you soon.

"Rob is in every scene in the movie and yet he's not necessarily a sympathetic character, you don't necessarily love this character. So, he's an actor who you want to watch"

How would you describe Cosmopolis?
It's a dark and surreal comedy on the end of the world. I would like the audience not to take it too seriously.

Was choosing Robert Pattinson as your lead an obvious choice for you?
At first I chose Colin Farrell but I was happy to fall back on Rob when Colin stepped down. Pattinson was scared of no being good enough but he was perfect as living trader living outside reality.

Will his fans be surprised by the movie?
They're ready to go. I went online and discovered websites dedicated to Rob and I found a lot of teenagers who read and loved he book. They're ready to see Robert Pattinson in a role where plays a different kind of vampire.

How did you decide how far the sex scenes would go?
I didn't think in terms of censorship or self-censorship. Everything is decided naturally with the actors. Robert was ready to be lead. He's amazingly charismatic.

How did you managed to film this impression of 'dreaming while awake'?
By filming from the lead's point of view. You have to feel at ease when he's in the limo and completely lost when he gets out of it. He's a spoiled child who lives in a virtual world.

Is Cosmopolis visionary?
The movie describes a reality. On of the financiers of the movie told me he recognized himself in it. The idea that this horrific tale could be anchored in the real world fascinated me.