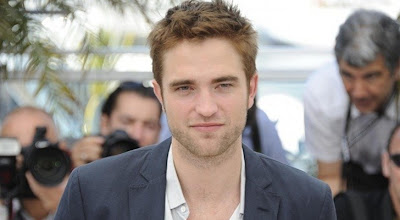 This is Rob's interview with Ciné Télé Revue (Belgium) - you can see the scans here. And catch up on everything else from Cannes!


The interview was done during Cannes. The interviewer precises that Rob was eating a lollipop.

In the movie, you get your prostate checked? Is yours asymmetrical too?
Rob: *laughs* I haven't checked that yet! Everybody talks about it, it's crazy how that line marked people.

Did you feel up to the task to take on this role?
Rob: When David Cronenberg called me I was in the middle of shooting Breaking Dawn. There were only three weeks left. As soon as I got home, I pounced on the script and read it in one sitting, in one night. It was really strong, complex and freaky but so funny!

Your character speaks all the time, weren't you scared?
Rob: The risk of failure was huge. At first, I told David I didn't feel ready for the challenge. There was too much pressure, but he convinced me. Even though he knew I didn't understand anything from the script. *laughs*

What didn't you get?
Rob: For Cronenberg, everything made sense. The fact that I didn't understand didn't bother him. He was more concerned about my performance. The world of finance means nothing to me. It conceals an absurd distortion of power struggles. But it's not the end of the world, it's a rebirth because this world needs sometimes to be cleansed and purified.

Your character tries to escape from himself. Since you became famous - and with all these paparazzi hanging on to your coat-tails - are you experiencing the same thing?
Rob: I try not to think about it, I only do my job. I stay cautious about all of this but it's still weird. It's like speaking in your sleep. Cosmopolis is a challenging movie that will open doors for me to new projects. I am very pleased. Saying that though, I can't compare this with my private life even if I feel completely claustrophobic.

Are you relieved that Twilight is over now and that you can now move on to something else?
Rob: I will never disown Twilight. It was my job security. I'll never try to find excuses. The advantage now is that directors think differently. As an actor, it's something you've always dreamed about.

Lots of people think it's because of Twilight that you're pushed to do more diarist and intellectual movies ...
Rob: I did little movies before Twilight. People only notice you when they feel like it. It depends from one type of audience from another. I 'acted' too in Twilight. It was a beautiful period in my life but now it's time to turn the page.

Are you still offered heartthrob's roles?
Rob: It's not always easy to play heartthrob. You need to be extremely confident or be completely oblivious to what people think of you. I like to keep my integrity as an actor.

Did you see 'On the Road' in which your girlfriend, Kristen Stewart, has a role?
Rob: Yes and it's sort of weird to see her like this. To have people clapping for you at Cannes, a Festival that's a little crazy and with so many people, is funny. We might expect those kind of reactions but always end up being surprised.

Did you become up professional opponents?
Rob: No, never. For a year now we both had the chance to evolve in the job we love, especially in those amazing movie projects. Kristen is really ambitious. She knows how to find good scripts, she has the nose for that. I admire her.
We wanted people to respect and understand our choices. During the Cosmopolis screening at Cannes, I was a nervous wreck. I was looking in front of me, behind me, trying to guess people's reactions. I was trying to listen for whispers. And in the end, I missed half the movie. *laughs* At the after party that followed, I was even more terrified at the prospect of having to face people's comments.

Will you be in a movie together after Twilight?
Rob: Yes, absolutely. We're trying to write a script together. It won't be for now but we've thought about it for a long time. The filming of the last two movies was long and difficult.My character doesn't change, he can't die. We finish on a high note.