Watch Rob's interview with TF1 - HERE or on YouTube below

Rob: I liked the words so much, I just wanted to ... I liked the sound of them. The meaning comes out of ... I wanted it to be more about mystery. I didn't want to explain it to anybody.

Talking about him walking up the steps at Cannes.

Rob: It's amazing. I thought that I'd maybe end up here in 10 years. It happens now, the year that Twilight finishes. It's suddenly, already .. I was scared of being typecast and everything. It's amazing. 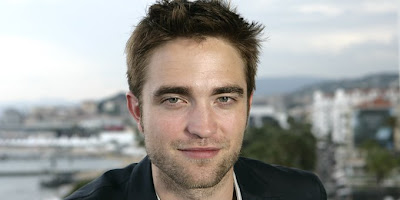 Rob: I remember the first conversation we had was on the phone cause I had to wait a week before I said yes 'cause I was, I didn't ... Normally you have to ... actors are good at bullshiting, no matter what the script is, you've got something to say about it. You even have to admit if you hate it but you have something to say. And with this one, I just couldn't ... I was like, I know there was ... I know it's about something but I don't know what it was about. But David just said, you know, he doesn't know what it was about either but there's just something interesting there.

Rob: I guess slightly more obscure things. I mean especially with the fact that this one had a strange script already and it's in competition in Cannes. There's no logic to the world.
David: There is none.

Rob: What I liked about it in the first place was the cadence of the lyricism of the writing. I think that's what I enjoyed playing about it 'cause you couldn't really approach it like a normal part, it was like, you're approaching it like it was a song or something.

Rob: It was one of the strangest things when we were shooting, we had one scene by the train station, the first shot of the movie, and we've been inside the limo during the whole shoot and suddenly I have to get out and there was like ... Twilight fans and stuff and I was .. I've never been more nervous in my entire life. That was ... it was terrifying. 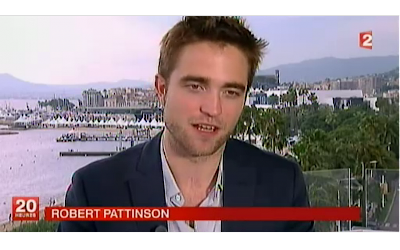 Firstly, one question. You'll understand, in every interview, David Cronenberg calls you Bob Pattinson. Should we call you Robert or Bob?
Rob: I haven't heard him say that. Yeah, maybe I should start going by Bob this year. I'm Bob in Cannes.

If you had to describe the movie with one term: shocking, violent or really so close to reality?
Rob: yeah, I wouldn't say it's close to reality. I think if there's one word, it would probably be 'strange'. It's a pretty odd movie.

One word about this car. what does she represent, this bunker where the hero pretty much isolates himself from the world that surrounds him?
Rob: Completely, it's his office, he's created a world for himself. He's kind of insulating himself from every aspect of life and anyone that comes into his world, has to behave like him, they have to speak his language. It's not even conventional English he speaks in that. Everyhing in control of his environment is totally
And it's strange, it's so small in there, it's very ..... to the whole movie. It's pretty much in the limo, the whole movie, it gives you this feeling of claustrophobia.

Eric Packer, this young golden boy that you portray, is in search of emotions. He always needs more, after the money, after the sex, he's sated of everything and death becomes a challenge. Is that it or not at all?
Rob: Yeah, I think he has quite a strange idea about dying tho. I don't think he feels, ..., I don't think it's a conventional idea of death. Death is just .. He's such an egomaniac that death is purely a choice for him, there's no such thing as fate. So, it's not like he's trying to kill himself, it's just what he wants to do.

Does it feel good to break away from the image? Is that what cinema is about, to change your mask?
Rob: Yeah! I mean, it's strange for me 'cause I don't really know who I am in reality and so getting to do movies is when you can explore certain ideas, when you have a feeling that you probably had your whole life and trying to figure out something about yourself. I's an arrogant reason for acting. But, yeah, it's definitely changing masks. It's especially after having done .. I'm known for a series, which a lot of people known me for the Twilight movies and this is radically different which is interesting.

Robert Pattinson did you take up French?
Rob: I'm terrible. I learned French in school and I always think I could speak French but I don't think anyone actually understands what I'm saying.

Rob and Sarah posing for pics at their appearance with Le Grand Journal (at about :50) or watch on YouTube. 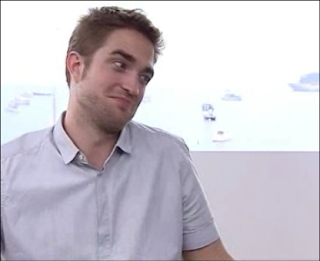 TG5: In this interview below Rob talks Kristen and On The Road. Translation (via) under the video. 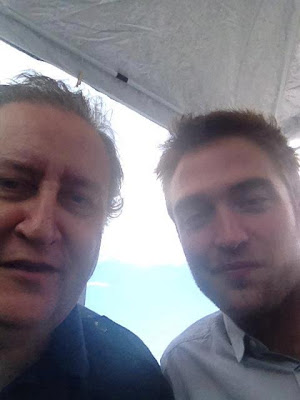 The journalist who interviewed him speaks over the video and also says "He's excited for the premiere of his movie at Cannes and wishes good luck/congratulates to his girlfriend Kristen Stewart. 'Kristen is amazing in On The Road. I've always admired her talent. It's incredible to be both here in competition at the festival. Maybe here starts a new phase of my career' "

"Kristen’s always been a great actress, people just…can’t even see what you actually are"

Interview with the cast and director

P: Is there some part of you that is thrilled to surprise your Twilight fans who would see Cosmopolis?
RP: When my casting in Cosmopolis was announced, I saw many of them buying Don DeLillo's book. And it doesn't shock them at all that I'm playing a role like this one. On the contrary, I feel liek they want to see us succeed, for us to be successful after the saga. They want us to be loved and respected. They're aren't fans like any others, they might not all be movie fanatics, but I can feel in them a desire to become one. They're interested in what we do, even if it's an usual movie like Cosmopolis. Actors that are in popular hits or franchises, often feel like they have to do things that would please 'this' audience. But I think that they underestimate their spectators. I know that Twilight fans want to adapt themselves. If you've played in Transformers, it doesn't mean you have to limit yourself to that all your life.

P: Cosmopolis press promise to be ... interesting. In hope that all the interviews won't focus only on one particular scene.
RP: I don't see which scene they could focus on that would reduce/narrow down the movie ...

P: In Cosmopolis, there's one where a taser is involved?
RP: The one in the hotel .. We shot that one in one take. Patricia (McKenzie), the actress, was really at ease with her body. When we had to rehearse the scene, she almost took all her clothes off. I just stood there in my underwear, so embarrassed! After the scene was done, I went to see the cameraman and asked him: "Is it me or what just happened was really intense? I almost felt like I really had sex!" The sex scene in History of Violence was already incredible. I don't know why but David Cronenberg is really talented for that. It's a surprising speciality for a director, but it's his.

P: David Lynch is pretty good too for that. It's funny because when you see Lynch and Cronenberg, the first thing that comes to mind isn't: "I'm sure those guys shoot amazing sex scenes."
RP: It might be due to the fascination that David has with the human body. Even in a movie like Videodrome, he sexualizes everything - the orifice that James Woods has on his belly looks a lot like a vagina. And I can really see David thinking about it and tell himself: "MMMh, I like that." We see less and less filmmakers having enough confidence that would let them flaunt and dig their obsessions. It's like Tarantino and women's feet. It's his thing, he likes that and thus going to put it iin all his movies. I'm not attracted to feet but when they film those of Bridget Fonda in Jacky Brow, it's sexy.

P: In Cosmopolis, you get a visit from Juliette Binoche in the limp. She uses the space in a very creative way ...
RP: Originally, the sex scene with Juliette was supposed to happen in a hotel room, but found it more interesting for it to happen in the limo. You have to ask yourself a question: how to you film, with success, a sex scene in a limo? Well, you end up bumping yourself everywhere in the car *laughs*. The worst is that I met Juliette Binoche, who is one of my favorite actresses, right before filming the scene. And 5 minutes later, we were writhing in the limo ... Very strange. But yes, it was more appropriate in that space.

P: What about Mathieu Amalric, the other French of the movie?
RP: He's amazing. I'm sad he's mostly filmed in wide shots because you can't really enjoy the crazy facial expressions he did. Does he work a lot in France?

P: Not enough. But he directs too.
RP: It doesn't surprise me. By the way, did you see the trailer for Rust and Bone? If only Audiard decided to film in English .. He's probably the biggest director active, able of making movies that touch the general public while still being, indisputably, art. The performances in his movies are the best, his action scenes are the best ... Not a lot of filmmakers can reach his level, except for maybe James Gray, with whom I dream of working.

P: What attracts you in project today?
RP: I want to do a movie that would make people want to hang its poster on their wall. Like with Trainspotting before: everyone had that poster in their room, me being the first. It was a way to declare one's identity. I dream of being in movies that would inspire the same thing.

Rob also talked to Metro France - and that interview is great as well.