Josh Horowitz: It's a different environment here, there's no Rob, there's no Kristen this time around (they are on the set of The Host) is that a little bid odd?


Stephenie: "It makes it a little calmer"

"I do miss them though, it seems funny not to have Kristen here like I'm on a set why can't I talk to Kristen, it's a little.. that's a little funny"


Josh Horowitz: Do you imagine that we will ever see any other films about those (Twilight) characters?

Stephenie: "You know, things change so much from year to year, I mean there are other stories obviously, I have a really hard time putting down characters so I know what would happen. It's just a matter of  are we tired of vampires? I kind of feel like we are maybe as a general group. I know that I am a little worn on vampires, so it might take some time to want to go back there. And you know of course for me it's easier because I know exactly what happens, so it's not as much suspense and stress"


"Some day on my death bed or whatever if I never get around to writing it, I'll tell everyone what happens, I'll just narrate for a little bit"


"I'm trying to stay away from the vampire stuff, because I do think if I can you know, focus on other things I will recharge a little bit there, so I haven't looked at anything vampirish for a while"

Stephenie also talked Fifty Shades of Grey and The Hunger Games - you can watch those interviews on Twilight Lexicon.

Don't forget that the MTV Movie Awards are this Sunday - let's make sure Rob and Kristen get their due.


Vote for them NOW 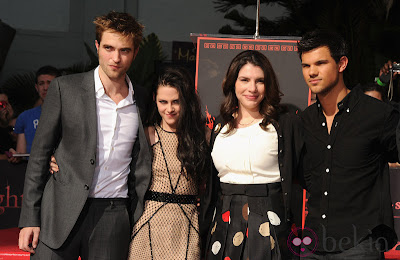