New Still: An Armed Rob Has A Moment With Cronenberg 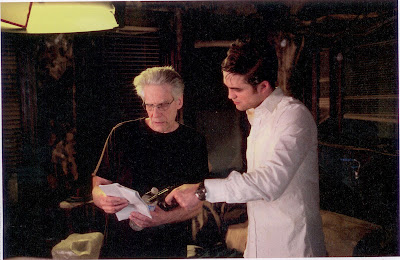 The new still is in Cahiers du Cinema magazine, which has an interview with David Cronenberg.

Translation of Rob mentions via

Why did you choose Robert Pattinson?

We inevitably think of his role in Twilight where he's the kind of vampires. Eric Packer is a vampire too, he evokes eternal youth and he's also a living dead.
David: Yes, we could say that the character is the werewolf of Wall Street, or the vampire of Wall Street but his way of speaking, his relationships with others and his appearance are completely different from the character he plays in Twilight. I didn't choose Robert Pattinson because of Twilight, but because he was was the perfect actor for the role. When I make a movie, I don't think about my previous work and even less the work of others. And I don't think about the movies my actors made. Of course I saw Twilight, Little Ashes, Remember Me. I also watched tons of interviews of Rob on Youtube - like a lot of directors do, to get an idea of an actor's personality. I thought even less of Twilight since I imagine a lot of people who are going to see Cosmopolis will not have seen Twilight. No matter what, I'm glad I chose him. I thought he would be good and he was, he even surprised me.

How did you guide him to help build his character?

David: Really concrete things: how to dress up, how to do his hair, his sunglasses. When he had to take off his tie and how it had to look. All this is directing an actor too and this has to be decided before you come on set. This isn't theoretical. An actor can't play an idea. You can't ask him: I want you to represent Wall Street with your acting. How would you want him to do that? It's no good to proceed like that. Where does he sit. How does he move. What kind of relationships he has with the people who enter his limo? Do they respect him or do they despise him? We deal with everything one moment after another, one detail after another. There's no magic spell for actors. It's like sculpting.

Is the Eric Packer from the book different than the one in the movie?

David: To be honest, I don't know. He says exactly the same words which is crucial. In that sense, he's really close to the character in the book. But what he has in his head, can be said in the book but not in the film. Packer is fascinating and scary. He's a dangerous guy. Not only as a capitalist, but also because he's capable of murder. And at the same time, he's sort of naive, pathetic and vulnerable, which makes him attractive. Robert Pattinson was really courageous by accepting this role and I am grateful. Young actors that are in demand are often reluctant at the idea of playing unlikable characters. Not really young actors, for that matter. They're always scared that by playing a bad guy, they'll be typecast as such and that it could hurt their career. They want to be loved and to be loved on the screen, in the USA at least.
Click for HQ 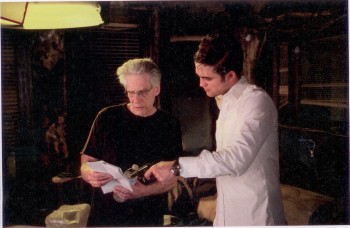