This is around the time of the year we'll start posting interviews in bulk. Not because they don't deserve their own post, but to make it easier for you to catch up, since we get so much promotional content. First up, Rob's chat with Candy magazine (Philippines). 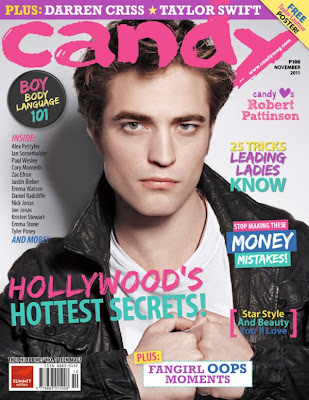 "I think we have influenced pop culture and vampire stuff, because there are a lot of things that look exactly like Twilight now. There was a strange energy about it which I don't think anyone saw coming. Maybe it will be emulated again."

About Edward "There are certainly incredibly bizarre moments in the story. But I think its good. I think in every movie -Edward becomes more and more human. He is like stunted with experiences. He does not have normal life experiences. I've never really seen Edward as a hero to be honest. I think both Edward and Jacob are almost the opposite of what a hero is. I think both of them are incredibly blinkered to a lot of things. Throughout the series , they become a little bit more open to the rest of the world and other people's interests, especially Edward."

"I think its really in this film and the second part, when he has a kid, that he is allowed to think. He is controlling, introverted, kind of insular person. As soon as he has a kid, it completely changes his mind. He becomes a different person. He can accept his maturity. Whereas before, he just refused to accept anything about his life , other than the fact that he almost puts all his love to Bella. He almost puts all his responsibilities into that relationship so he doesn't have to deal with anything. Its like the only thing keeping him alive is this girl. There is nothing else to him in this world so he has not really claimed anything. And then as soon as you bring in another creature into the world, then your realm of understanding and your realm of interests and priorities have become much wider."

"Since I fell into acting to begin with, I have been basically learning and just experimenting with how to be better. What I actually wanted to do with myself through each movie is to experiment. Up until the first Twilight, you could really try and find your style and share your ideas without being judged too harshly. But then, after the first one, everyone is watching your work.

"I have been kind of trying to think of how to achieve want I want to achieve in the context of everyone watching and kind of judging. It kind of stressed me out for a little bit. But now I guess, I am more relaxed because its the end of the series. I used to have to wedge in other movies between Twilght movies. And I was always concerned that I might be oversaturating audiences with Edward, Edward, Edward all the time. But as it has finished, I feel like I do not really have anything to lose and I can do whatever I feel might be cool."


Twilight Poison also has a great interview by Cine Premiere with Rob, Kristen, and Taylor. Read it here.


Finally, Kristen talked about Rob and Breaking Dawn in her interview with Glamour UK. Here's are those parts. Check out her pictures on their site.

She's also sticking to her resolve in staying under the radar about that likely-but-never-confirmed-nor-denied-relationship with Robert Pattinson. With gossip columinsts alternately reporting that they are together, aren't together, have broken up, are back together, does she never feel like just going on the record about how it really is? Apparenlty not. "It's funny when this question comes up because I sort of feel like I don't really care!" she says looking like she truly doesn't."People can say whatever they want ..." She trails off, then adds, "[The interest] is totally understandable, but when it's personal to you, it's like your life becomes a product, and I'm repelled by that. I don't like to give away gems that people are gonna be like 'Oh my God!' So I'll always just shrug it off- In fact, I always find it kind of funny, and not just with Rob."

"There are two big sex scenes in the two [final] films, and we did them fairly early. It was so weird, it didn't even feel like we were doing a scene withing a Twilight film. I was like, 'Bella! What are you doing? Wow! What is happening here?!' It was surreal. We [originally] got rated R [restricted under-17s]. They recut it." Does she realise, I say with a raised eybrow, that people would pay good money to see the original, R-rated version of that sex scene? "It was tame!" she insists, adding. "I've done my share of coming-of-age movies, but they [the rating boards] know who our audience is, and can be like, 'Hmm guys, just cool it a little.' "It's funny because in the book, you don't see anything. It's everyone's imagination, so it's entirely subjective. I hope it's good!"

Talking about wearing a bikini in the movie: "Then, when I was doing prep for Breaking Dawn, I suddenly realised, 'This is so not On The Road. people definitely want to see you looking trim.' Usually, we're all making fun of Taylor [Lautner] for working out so often, and then suddenly me and Rob were like, 'Shit,' and were running around the block while Taylor laughed at us."

Speaking of her co-star ripped physique, did she know her last three films feature six of Glamour's top 50 sexiest men , namely Rob, Taylor, Kellan Lutz and Jamie Campbell in Breaking Dawn, Garrett Hedlund in On The Road and Chris Hemsworth in Snow White and the Huntsman? Is that just good luck, or some astute film choices? She starts laughing again, and it transpires that such polls provides endless on-set ammo. "The first time Rob was the 'sexiest man in the world', a couple of years ago, it was the biggest joke in the world. We never stopped taking the piss, and neither did he. [But] they're all great guys and not ... geez, now I sound like I'm generalising about attractive men, but there's something a little vain about working out every single day, whereas they're the greatest guys and all kind of goofy. That's why it's so funny."

"Laura Marling. Man, I'm such a huge f**king fan. Rob introduced me to her on Twilight because he thought that [her music] was right for the movie. I love her."