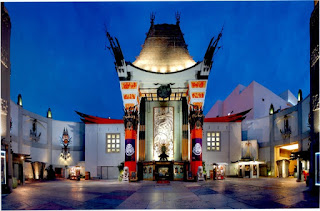 Today we learned a lot more about the Breaking Dawn premiere camping, and the Grauman's Chinese Theater ceremony honoring the Twilight cast.

You'll be able to watch the Grauman's ceremony live on their facebook page November 3rd. The rest of the details are included on the press release:

---The most famous place in Hollywood, The Chinese Theatre (www.chinesetheatres.com), is set to honor the acting trio of “The Twilight Saga,” Kristen Stewart, Robert Pattinson and Taylor Lautner. The three will again appear together in the fourth installment of the blockbuster franchise “The Twilight Saga: Breaking Dawn - Part 1," due in theatres Nov. 18.

The handprints-footprints ceremony honoring all three actors will take place Thurs., Nov. 3, at 10AM.

To date the “Twilight Saga” franchise’s first three films have grossed over a combined $1.8 billion at the worldwide box office.

Unlike any other award in Hollywood, be it an Oscar® or a sidewalk ceremony, The Chinese Theatre handprints-footprints tribute is the most selective of all, since over the course of nine decades, only 250-plus such honors have been presented.

Movie exhibitor Sid Grauman, who was one of Hollywood’s best known and most creative showmen, opened The Chinese in 1927 and launched the handprints-footprints ceremony a year later, as a promotion to advertise his many premieres and first run films.

Today, The Chinese Theatre forecourt is among the world’s most photographed tourist sites, annually attracting as many visitors as the Taj Mahal in India and the Prado Museum in Madrid. Along with Disneyland and Universal Studios, The Chinese Theatre is among Los Angeles’ top five tourist attractions, according to About.com.

In any given year, The Chinese Theatre hosts over 40 red carpet film premieres and since it opened, it has hosted three Academy Award® ceremonies and numerous world premieres, including those for internationally-acclaimed film franchises, such as “Star Wars” and “Harry Potter.”

More movie popcorn has been consumed here by more famous faces than anywhere else on earth and in 2012 The Chinese Theatre celebrates its 85th anniversary with many new innovations
planned. 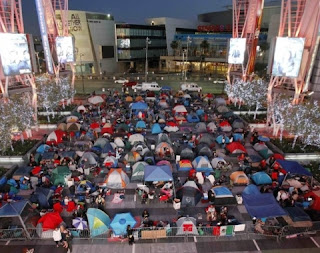 For fans hoping to get on the red carpet for the Breaking Dawn premiere, Summit has released the rules for campers:

TWILIGHT Fans are allowed to begin lining up for camping in Tent City at NOKIA PLAZA L.A. LIVE at 6:00am PT on Thursday, November 10, 2011. No fans are allowed to line-up prior to that time. The location and start of the official fan camp line will be set by Summit Event Security and all other non-official lines will not be recognized.

Overnight camping is allowed in designated areas only, starting in the Nokia Plaza. Please follow all directions advised by L.A. LIVE and Summit security. Please note, that special wristbands will be distributed on a first-come, first-served basis and each fan must be present to receive a wristband. Each wristband will be numbered and reserves a space in the Fan Viewing areas for the BREAKING DAWN – PART 1 Red Carpet arrivals in sequential order. Every individual who is granted access into Tent City will be entered into a database that matches them with their unique wristband number. The wristbands DO NOT enable access to the Movie Premiere.

Fans will be asked to change location as Premiere set up begins in the Nokia Plaza on Monday morning November 14 at 6:00am PT. This will be the only relocation during the camping event.

· ONLY Standard Sized Pop Tents will be allowed (4'x4' [16 sq. ft.] or less. No oversized tents, staked tents, etc., due to limited space)
· ABSOLUTELY No Drugs or Alcohol allowed on premises
· No Cooking On-Site or open flame
· No horseplay. If anyone dumps food or beverages on another camper, they will be subject for removal
· No amplified music. All music devices must be used with headset or earphone
· Smoking in Designated Areas Only outside of the NOKIA Plaza boundaries
· Fans are responsible for their own property. LA Live, AEG, nor Summit is responsible for any lost or stolen items
· Everyone must please pick up after themselves. A fine will be enforced for anyone who litters on Nokia or LA City property
· Please only use the restrooms designated for fans and respect the other area businesses
· Guests must follow the rules and directions of L.A. LIVE Management/Summit Security at all times

THANK YOU for your cooperation and adherence to the above to help ensure a safe and entertaining experience for everyone!

Twilight fans will be given wristbands starting at 6:00am PT on Thursday, November 10 2011. Wristbands MUST be worn until the premiere is over. Any wristband that has been tampered with or removed will NOT be considered valid. Any fan arriving without wearing the original wristband they were provided will not be allowed into the viewing area. There will be periodic spot checks through November 14, the day of the event. 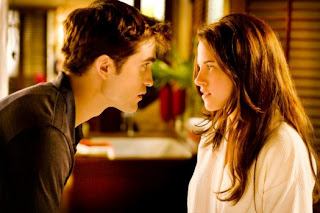 Finally, look for a new Breaking Dawn sneak peek during Wednesday night's 'Revenge' episode. It will air 10/9c on ABC.