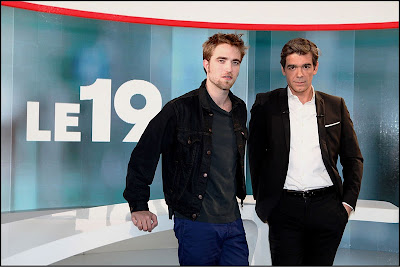 Full interview in HQ or below

Xavier : Wow. Before talking about the movie, what do you think of all this ? Is it always like this?
Rob: Not particularly, only at these events. I have the most ridiculous facial expressions when I go out. I’ve seen this clip a few times; I look like I have a problem.


Xavier: Is it like this in every country of the world when you’re promoting?
Rob: Kind of, yeah. This is the fourth movie now and nothing has changed. Everybody is still screaming?


Xavier: A lot of your whereabouts are comment on, on twitter? Your life looks like an internet reality tv show. Are you okay with this, or not?
Rob: it’s an unintentional reaction but yeah. I’ve become better at hiding over the last few years.
At the beginning I was overwhelmed by everything. I think I was trying to hard to deal with all this.
I’m starting of fit in, I don’t live in a town, it’s much simpler.


Xavier: You’re living like a vampire, in hiding?
Rob: Not exactly, I mean I live in California so there’s not too many shadow there.


Xavier: Let’s talk about the movie. You’ve been playing the role of Edward Cullen for three years now.
Edward is a nice vampire; he doesn’t kill humans and falls in love with Bella, a young normal girl, played by Kristen Stewart. For the past three movies, let’s juts say that those two have been chasing after other, right? And now, they’re finally getting married, sleep together and make a baby. We can say that Edward is pretty slow at doing things but when he does it, he goes all out!
Rob: yeah, he’s very slow moving. It’s funny, there’s like, the first series which is all about a kind of fear of having sex, scared of something happening. But when it finally happens, they create a demon baby. It’s kind of hilarious, especially since it doesn’t stop teenagers from waiting to have sex.


Xavier: The wedding scene, did it make you want to get married?
Rob: I don’t know, I guess so. I’ve always been … I’ve always like weddings. I haven’t been to many weddings My older friends are starting to get married. It’s scary in some ways but I mean you can still get a divorce.


Xavier: But if you have kids, you can’t get divorced. I mean, you can’t divorce your kids.
Rob: No you can’t, but you can have a lot of them so you can at least get a good one.


Xavier: Do you want kids then?
Rob: Definitely, I wanna have kids.


Xavier: In the movie, there’s this incredible scene where you perform a c-section with your teeth, don’t you?
Rob: Oooooh nothing came through my ear piece.


Xavier: In French we call that a ‘cesarienne’.
Rob: Yeah, I do it with my mouth. I mean that was one of the most fun things I’ve ever had to do in those movies. I mean it was a ridiculous scene, in the end we were crying laughing. But it’s scary in the movie, it’s very disturbing.

Xavier: What’s really strange is that despite being married, Edward always looks reclusive and misunderstood. Is he like you?
Rob: I guess he looks a little bit like me, I mean I look like a husband that’s been married for 40 years.

Xavier: What do you have that is vampire like in real life?
Rob: Nothing. I mean, I guess.. Cause I’m not really playing a vampire. I’ve always been told that I was playing a vampire but I‘ve always felt like playing a young person with a lot of problems. That’s how I always interpreted it. So I guess a lot of those, a lot of those translated into real life. But being actual vampire like, like wanting to kill people. No.

Xavier: So it’s the cinema that makes you appear as a vampire?
Rob: Hum, I hope so. It’s a very complicated industry. So however long … I love it when I’m still getting jobs. It’s completely unexpected after Twilight is not done.

Xavier: After four years of Twilight, you have to stop pretending to be 17. Is it scary?
Rob: I think it gets, It’s more scary when I have to still be 17 when I’ll be 26 next year. You see yourself in the movies and you’re like, you have wrinkles. I don’t know how much longer I could play 17. I could still play 17 when I was 21 but I’m coming at the age when I definitely can’t play it anymore. It’s definitely the end of my youth.

Xavier: It’s the end of your youth. Did this movie help you grow?
Rob: Yeah, definitely. In a strange way, I mean I’d love to have been able to do, to experience more things without being observed so much. But I’ve done things hardly anybody people my age have done so…It’s been an incredible life so far.

Xavier: Last question; is it true that you like Michel Houellebecq?
Rob: Yeah, definitely. I was supposed to meet up with him the last time I was in Paris and then I couldn’t do it but yeah, he’s one of my favorite writers.