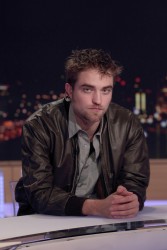 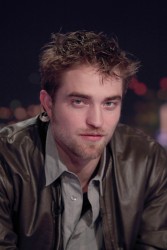 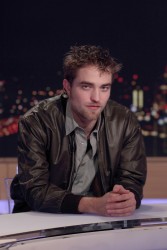 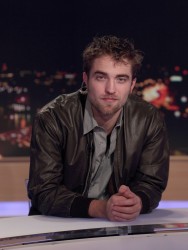 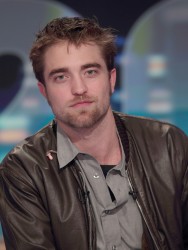 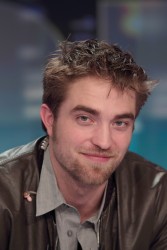 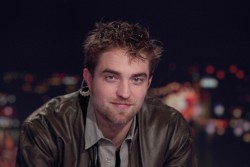 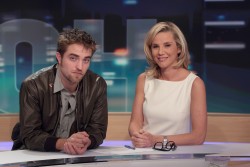 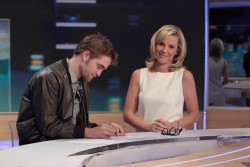 Some of the questions asked - translated by fountain pen (thanks!)

1st question: you've come 3 times in France. You must like France?

"Are you sad about the movies being wrapped up?"

"do you think your character is old fashioned? Are you close to him?"

Laurence: Twilight, the fourth movie is coming out next month. The luckiest were able to see it yesterday at the Premiere of the movie, in Paris. We’ll talk about it in a few seconds with Robert Pattinson but first Benedicte Duran and Frédérique Miniard are going to present us the movie.
I’ll spare you what said in the tiny documentary, nothing interesting.
Laurence: Robert, hello.
Rob: hello.

Laurence: Thank you for being in Paris. You come quite often in France, you have to like France to come promote the movie, don’t you?
Rob: No definitely, yeah. I love coming here; I come pretty much every three months.

Laurence: So today you came to talk to use about the last movie of the saga, which was cut into 2 movies. The shooting is over, everything’s packed. How are you feeling? Do you feel sad because it’s over or are you relieved?
Rob: I got a little bit of both. I mean I spent four years … It was a major part of my life. When I finished one of the Twilight movie, we filmed another one, I did a different movie then I went back to shot another Twilight so it’s very strange to be in this system anymore. I got used to it. I’ve made some great friends but I don’t know how much longer I can play seventeen so … I’m almost 26. It gets tricky after a while.

Laurence: About your character, Edward? Does he suits you, do you feel over him now that you’ve went forward in your movie career.
Rob: I guess someway, I’m filled with self-loathing , no I don’t, no. I guess in some ways I have. In this new one, I sort of step away from his characterization in the book, because he’s really passive in it and I needed to do more to give some kind of energy to the character. But I don’t know if he’s like me, maybe I got closer to him after all these years.

Laurence: Anyway, what’s interesting and that we saw in the news footage earlier is that your audience changed too. Before you had a bigger number of younger fangirls but now you also have the moms of those girls, that are called twimoms, the twilight moms. Does this surprise you, this phenomenon of a generation jump, going from little girls to older women?
Rob: I think they got younger. It started off with fans in their forties and now I feel like they’re coming right out of the cradle. I always assumed it was going to be a younger audience but it’s a lot of women in their mid-twenties, almost. The ones always hanging out on set. I don’t know maybe the little girls are getting influence by their moms.

Laurence: Do you consider yourself a big Hollywood star or are you still, in your head, this English kid who like music and rock and roll and sort of dies this as an act of rebellion?
Rob: I don’t know. I don’t have the same life that I used to. I’ve learned to like L.A. a lot more and I was in London last week and it’s almost impossible to live in London. There are so many people in the streets peeking out of everywhere so you have to hide. But in L.A. if you get out of your car you can probably avoid the crowd. Yeah, I don’t really know what I am.

Laurence: Let’s talk about music. You sang two songs for the first movie of the saga. Now that the filming is over, there are rumors that you’re going to record a whole album?
Rob: I mean, maybe one day. There are these sorts of rumors. I’m always playing and recording but I don’t know. People hate when actors become musicians so I’ve been avoiding it for the longest possible.

Laurence: You still making movies. You just filmed a movie with the Canadian, David Cronenberg . Do you want to take a different turn with your career after the enormous weight that is playing Edward Cullen and Twilight?
Rob: I mean, it’s not really moving away. I don’t think I can see myself doing Twilght after Twilight film for the next twenty years. But I’ve always wanted to mix it up, I mean working with people like Cronenberg, I mean that’s … I loved Cronenberg before I even started acting and especially with amazing actors, Juliette Binoche is in it, and Mathieu Amalric. There are tons of French people working with him. It’s totally different from what I’ve done before and I feel like I’m going in the right direction.

Laurence: Thank you so much, Robert Pattinson. Did you learn some French words during the filming of Cronenberg’s movie?
Rob: French words in general or about him?

Laurence: French words in general?
Rob: Just words in French. I can say huh. What do I know in French huh? I’m gonna sound like I’m completely insane. Le cochon dinde (guinea pig). Le bibliothèque (the library). Quelle est le date de ton anniversaire? (When is your birthday ?). god, i sound like such an idiot.

Laurence: No, you sounded very charming. Thank you for coming over. Breaking Dawn comes out next month on our big screens. 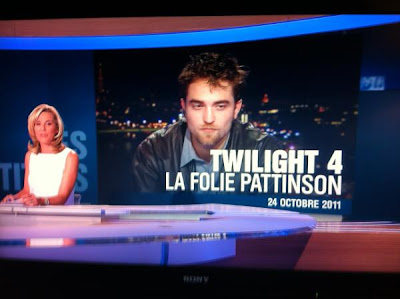 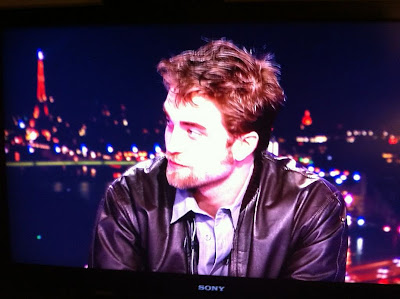 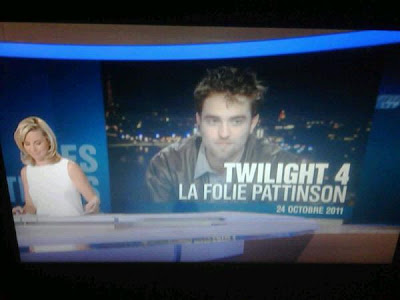 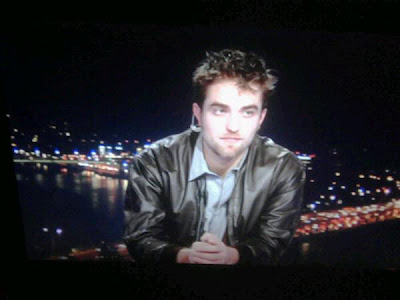