Here's our latest interview wrap (which you'll see a lot of during promo time).

First up, another one of those Bill Condon interviews is in. He talked to Fandango about Edward's backstory and working with Rob. Read it at their site.

Tom Sturridge explains why he won't talk Rob, in a recent magazine interview (See the rest of the scans at Suffolk17)

Rob also gave a new interview to Cinemania, and Twilight Poison translated it for you. It's a great read, so don't miss! 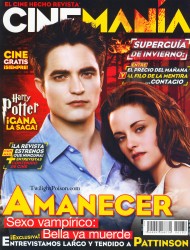 Email ThisBlogThis!Share to TwitterShare to FacebookShare to Pinterest
Labels: All About Rob, Breaking Dawn, Interview