'Breaking Dawn' Sex Scene: What Was Cut & Why

UPDATE 10/31: Read what director Bill Condon had to say about this issue, when contacted by MTV. 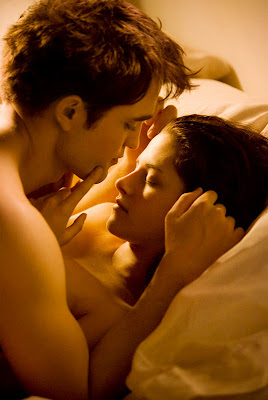 Light the torches and go after the monsters.. er.. in this case the British Board of Film Classification. At least that's all we've heard from fans, after they found out exactly what was cut from a Bella and Edward sex scene in order to avoid an R (15) rating for Breaking Dawn.

The British Board of Film Classification advised producers to edit the “graphic sight of Edward thrusting while he lies on top of Bella” to avoid the film being given a 15 certificate.


“This film was originally shown to the BBFC in an unfinished version,” a statement on the BBFC website says. “The BBFC advised the company that the film was likely to receive a ’15′ classification but that the requested ’12A’ certificate could be achieved by making changes to a sex scene between the Edward and Bella characters.


“In particular the BBFC suggested that [the] more graphic sight of Edward thrusting while he lies on top of Bella, and while her legs are wrapped around his torso, be removed.


“When the finished version of the film was submitted these changes had been made, with the scene having been reduced in length and with less focus on full body shots. As a result, the film was classified ’12A’.”

We would assume that applies across the board, with the U.S. version having to do the same to achieve a PG-13 rating. We say, we'll love the film, like we loved the book. Some things are just better left to the imagination...