UPDATE 10/27: MTV gave more details today. They will show an exclusive Breaking Dawn clip, followed by a Q&A with Rob, Kristen, and Taylor. Submit your questions to @MTVNews with the #AskTwilight hashtag. 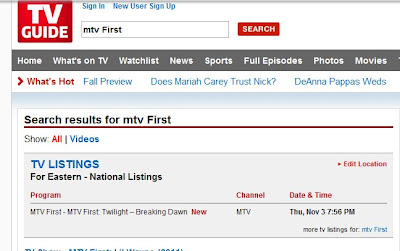 According to TV Guide, the special is set to air on Thursday, November 3rd (now confirmed by MTV). That's the same day Rob, Kristen and Taylor will attend the Grauman's ceremony in Hollywood. Let you know who is part of the MTV special ;) when we get the official word!


Thanks for the tip KStewartNews