Total Film: Rob Is Worried About The Sex Scenes 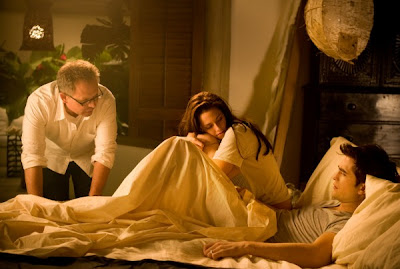 Total Film posted a preview of their interview with Rob, and it seems the thing he's most worried about, is those sex scenes fans fantasize about:

So, was Pattinson daunted by the prospect of the sex scenes? “It’s funny,” he added. “People talk about sex scenes in the book, but there aren’t actually any. It’s all in people’s imagination. They’re like ‘It’s so hardcore,’ but it always fades to black. It just shows bits of the aftermath.”

Not that that filmmakers will be taking that approach. “You have to show something!” Pattinson asserts.

“You can’t fade to black in the movie because people would go insane!

“It’s strange trying to do a singular event which everyone is expecting. At the end of the day, watching other people having sex is never going to be that spectacular. Hopefully it’ll be good. There’s so much hype. You’re like ‘God, I hope this lives up to it.’”

Read the rest at Total Film