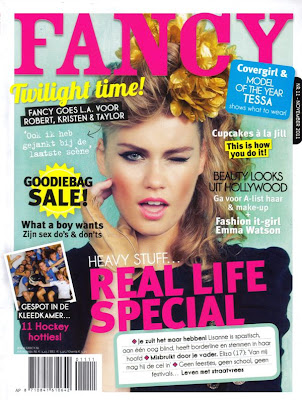 Thanks to HollandGirl for translating:

Sad news for all Twi-Hards. With Breaking Dawn coming closer, the Twilight Saga is really approaching the final end. One relief: Fancy got the chance to fly to LA for an parting interview with Robert Pattinson, Kristen Stewart and Taylor Lautner. ‘When we were filming the final scenes, we all started crying’.

Robert Pattinson
‘Because of my fame, I think like a spy now’.

We heard that during a steamy sex scene, you destroyed a bed!
‘You are very aware, hahaha! When Kristen and I had to play the honeymoon, I totally immersed in the scene. But I need to make it clear: the bed isn’t destroyed. Because of the love bites with my vampire teeth, only some pillow covers and sheets from expensive, Egyptian linen are mutilated. But still dreadful.’

Have you taken a reminder from the set?
‘Hmm, let’s think… During shooting I stole the bathrobe from my hotel room for the first time, haha! But from the Breaking Dawn-set I haven’t taken anything away. While shooting Eclipse I did. I shipped some BMX-bikes from the film to my home in LA. But when the film crew discovered that, I had to give them back.’

Because of Twilight you have become a celebrity. Does that only have benefits or are there also some downsides?
‘Being famous is very cool! I travel a lot, I meet very nice people… But it also has some downsides. I’m searching for a home in London at the moment. While viewing the house, lots of strange thoughts popped up in my mind. Can paparazzi park their cars in front of this house? Are strange fans able to camp on my pavement? I think like a spy or a secret agent and that’s pretty weird.’

What are you planning to do after Twilight?
‘After Breaking Dawn you will be able to see me in the movie Bel Ami and in the drama Cosmopolis. But what I’m really excited about is to start making music again. I play the guitar and the piano and between shooting the scenes I wrote lots of songs. So I can’t wait to perform again. The energy you feel when you show up in a full house: super!’