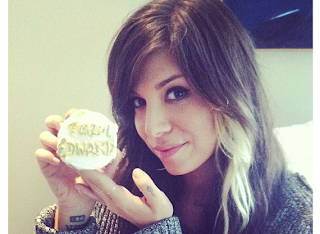 No question what team she's on ;)

It sounds like this week we'll get a preview of the Christina Perri song for the Breaking Dawn Part 1 soundtrack!

In advance of the track release, a 30-second preview will be available on THE TWILIGHT SAGA Facebook page (Facebook.com/Twilight) starting this Thursday, October 10th , (We're thinking they messed up on the date, probably mean the 13th) featured on a special "Soundtrack" tab. Additionally, the lyric video for "A Thousand Years" will premiere exclusively via www.christinaperri.com beginning at midnight October 18th. The music video for "A Thousand Years," which was directed by Jay Martin (who also directed the video, "Jar of Hearts") will be released in early November.