Chilbunch has been sharing her very awesome Water for Elephants premiere experience with fans, and here it the last part of her trip to New York. Hope you enjoy!

Rob was scheduled to be on the "Today Show" the morning after the "Water for Elephants" premiere. So Erkya, Jeri, Rebecca and I decided to meet up before dawn and go check it out and hopefully get to see him again.

At about 8:30am, the NBC building gold revolving door was propped open and we knew Rob was about to come out to the plaza. About two minutes later he walked out wearing his shades and looking great!
Rob coming out to the plaza
Given the time constraint, we did not expect him to get over to where we were waiting and watching. I have to say Rob never disappoints, he made it to our area and we got another encounter. Eryka and Jeri asked for a picture with Rob. He ended up holding the camera to take the picture with them. 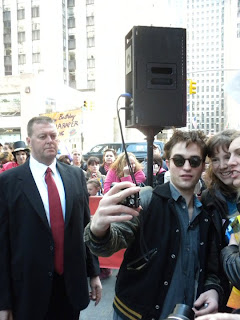 Credit - Katina
Rebecca asked me to take her picture with Rob. Stupid me ... I forgot I had my camera on zoom and realized it on the second shot. I apologized to Rob and he was so sweet about it and posed for a third time. Three times the charm, and on the last shot I got a really nice smile. 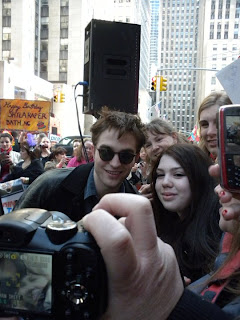 Credit - Katina
I would have been next for his signature and picture but NBC was telling him they had to get inside to tape his segment. Rob told us sincerely “I'll be back” but I knew he wouldn’t be able to come back because of the "Regis and Kelly" taping. While I didn't get my picture with Rob, let's just say it's not every day you get Rob to pose not once, not twice.. but three times.

After his segment with Matt Lauer we went over to "Regis and Kelly" hoping for our last glimpse of him. We were lucky enough to get there ahead of him and watched him go into the studio to tape. That was the last of Rob we saw in NYC....it was good while it lasted!


Please if you use any portion of this story including pictures or video - credit Robert Pattinson News and Chilbunch.