So we finally have time to kinda catch our breath after 24 hours of consecutive awesome news on the Rob front. And it keeps coming, this time via Twilight series producer Wyck Godfrey. In a new interview with USA Today, Godfrey spills some juicy scoop on what we can expect when Edward and Bella finally get down to business.. 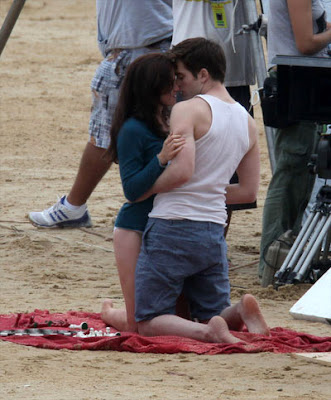 And what can be better than hearing about Bella becoming a vampire than Kristen talking about it herself?.. and she's already tackling that transformation. (At about :55)

It's been fun following the Twilight cast on twitter, because you never know what kind of production details they're gonna spill. That was the case Wednesday, when Justin Chon basically gave the heads up to fans that production is moving to Vancouver at the end of January.

As for the rest of the cast, they've been busy fighting the elements fake and real.. down in Baton Rouge.

Lastly, a rumor that the cast may be doing a promo shoot next week for Breaking Dawn. This we cannot confirm. 1/8 Update: Peter confirmed the news with this tweet.

It's been so fun following this last chapter in the series, it's gonna be sad when it's done. Only a few months to go.. sniff.

Email ThisBlogThis!Share to TwitterShare to FacebookShare to Pinterest
Labels: Breaking Dawn, In Production