The news we first told you about a month ago, was officially confirmed Monday. Rob will be attending the MTV Movie Awards on June 6, to present a new Eclipse clip and hopefully win some awards like he did last year. 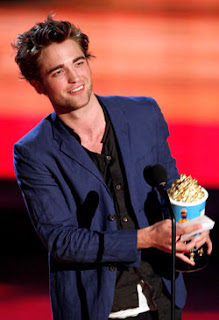 It'll be a big evening for the "Twilight" kids. "New Moon" is up for five nominations: Best Movie, Best Female Performance (Stewart), Best Male Performance (Pattinson and Lautner), Best Kiss (Stewart and Pattinson) and Global Superstar (Stewart, Pattinson and Lautner). Fan voting in all of these categories is now under way at MovieAwards.MTV.com and will stay open through Saturday, June 5. But voting for Best Movie will stay open throughout the awards show itself, which means you'll have a chance to affect the night's biggest prize until the very last minute.

So what are you waiting for? vote for Rob and New Moon! and come back here on June 6, for all the coverage from the MTV Movie Awards.