UPDATE (6/20) - Apparently Penn is in a Buckley movie, but not the same one. The LA Times attempts to sort it all out. Again. 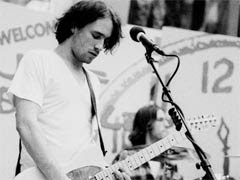 Twitter was abuzz Wednesday, with word that Penn Badgley had been cast in a role that Rob has talked about before. But as it turns out, the alleged big casting news on the Jeff Buckley biopic was way off, as the LA Times confirmed:

"Penn is not involved in the film at all," Williams said in a phone interview. "It's crazy how these stories get out." When asked about Pattinson's involvement with the film, Williams said that although he's a fan of the British actor, he'd only had preliminary meetings with Pattinson, who was interested in auditioning for the film project, now almost six years in the making. Williams, along with producer Michelle Sy, casting director Billy Hopkins and executive producer Mary Guibert, Buckley's mother, are still seeking out actors for the casting process, which will likely begin in October, Williams said.

The article goes on to say why it's unlikely that either Rob or any other well known actor will be cast in the role. Read the rest at the LA Times.