After a week or so of no updates from the Cosmopolis set in Toronto, today things perked up. These are the first pictures of Rob on set. And it was 'bring your dancing shoes' day for the extras
See more costumes and read more about the extras involved in the scene.
Fan pic

This must be a tough job..
So. jealous. right. now.
Rob always leaves a lasting impression :) 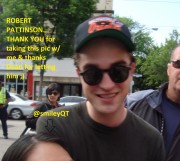 A few days ago an extra also shared a cute bit, after reportedly filming a protest scene.
The Canadian government has invested $2.7 million in Cosmopolis, in part to thank director David Cronenberg for staying true to his roots:
"David Cronenberg is the definitive Canadian artist, who despite receiving many tempting offers to move to Hollywood, has remained in Canada to practice his craft," said Carolle Brabant, Telefilm Executive Director. "Since his early years in the 70s as a visionary horror film director, Telefilm has been a proud supporter of this edgy auteur who constantly eyes new challenges, while all the while creating films that connect with mainstream audiences worldwide."
We also heard rumblings that Rob's costar Juliette Binoche was finally in town to join the production, and Samantha Morton shared her excitement about working on the project:
And can you tell me anything about ‘Cosmopolis’, which you’re shooting soon with David Cronenberg?

‘No! I’m just excited. And I’m a huge fan so when I spoke to David I was just talking about his film “The Brood” which is one of my favourites. I just think he’s amazing. I’ll have to calm down before I go on set!’
Tuesday's filming made eTalk, and left those who worked on set feeling grateful. Updates as we get them!

Email ThisBlogThis!Share to TwitterShare to FacebookShare to Pinterest
Labels: Cosmopolis, In Production, Toronto