Fall is Almost Here & You Know What That Means: 'Team Edward' Maze!

And yes.. that's Jacob next to him. But really, where would you rather get lost in? 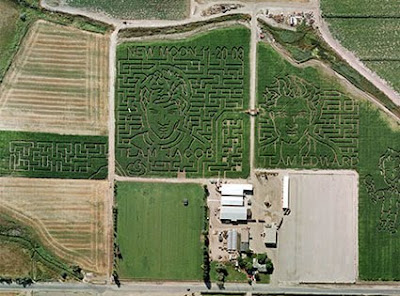 The maze is part of the yearly display put on by Black Island Farms in Utah. The Salt Lake Tribune has a preview (picture) of what visitors can expect this year:

This year’s maze features the likeness of Taylor Lautner, Robert Pattinson and Kristen Stewart of the “Twilight” movie series. Those attempting to find the one exit from the more than five miles of twists, turns and dead ends likely will spend more than an hour to make their way out. Anyone smart or lucky enough to make the correct decisions may be able to complete the task in 15 to 30 minutes.

Email ThisBlogThis!Share to TwitterShare to FacebookShare to Pinterest
Labels: Halloween, Just for Fun