Melissa Rosenberg today updated fans via her Facebook on the feedback she's getting from Breaking Dawn director Bill Condon:


Hi Y’all! Sorry I haven’t checked in for a while. Been immersed in the world of Breaking Dawn. I’ve been working very closely with our director Bill Condon, whose input has been SO great. He understands story, structure and character as only a fellow writer can, but he also has fantastic visual ideas. And he’s not shying away from anything! Sex, birth, feathers, blood… it’s all in there. More later! xoxo Mel

Production is set to begin in November. But don't get too excited just yet, let's remember who has the final say... 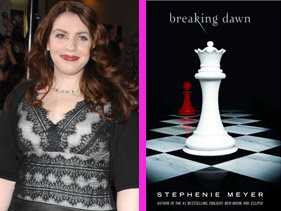 Over on the Water for Elephants front, its author Sara Gruen is currently on tour with her latest novel Ape House. She recently talked to the Globe and Mail and mentioned how satisfied she was with the film:

Finally, switching topics briefly, I understand that filming on Water for Elephants (with Reese Witherspoon, Robert Pattinson and Christoph Waltz) has just wrapped. Are you happy with the result?


Very happy. The studio consulted me more than they contractually obligated to do, and the screenwriter did a brilliant job in compressing the novel into a two-hour film by combining a few characters and incidents in ways I couldn’t have begun to.

This article about Gruen's new book was very interesting, but what we instantly fell in love with was the picture that accompanied it.. 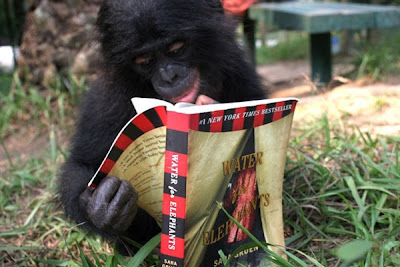 How much do you bet he's rooting for Jacob  :)