Did EW Question Reveal Scoop On Water For Elephants? 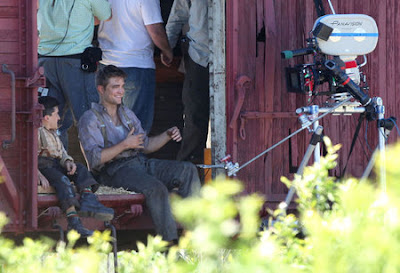 Entertainment Weekly recently asked readers to submit questions for Sara Gruen, and among them was a very revealing one:


We’ve heard that there are some pretty major plot changes in the Water for Elephants movie. Did Ms. Gruen have any say in them?


Writing a screenplay is a very different skill than writing novels and is not one I pretend to possess. Richard LaGravenese took something that takes 12 to 14 hours to read and condensed it into something that can be viewed in


two hours and still remain true to the story. My hat’s off to him.


I imagine the "pretty major plot change" is condensing the characters uncle Al and August into just Uncle August.

Hmm.. it could be, but when we looked up the exact definition of "plot" this is what we got:


The pattern of events or main story in a narrative or drama.

So EW asked about "pretty major changes" to the pattern of events or main story in a narrative or drama,  and Gruen did not say that wasn't the case. Guess we'll just have to wait and see on April 15th..

Email ThisBlogThis!Share to TwitterShare to FacebookShare to Pinterest
Labels: Post-Production, Water For Elephants