UPDATE: Cronenberg tells the Huffington Post that Rob was terrified to play Eric.. and that's a good thing:

Cronenberg: Actors need to scare themselves. When I started to talk to [Robert Pattinson for "Cosmopolis"], it became apparent that he was terrified, as Keira was terrified to do Sabina, and that's always good.

Why did you want Pattinson for the part in "Cosmopolis"?
Cronenberg: Well I'd watched a movie that I think not too many people have seen called "Little Ashes," where he plays Salvador Dali, and he plays him as a young man and plays him with a Spanish accent. So I thought, well that's really interesting, I mean this was before he was a "Twilight" star, because, it takes a particular handsome young man to decide to play that role. And then I did watch some of the "Twilight" stuff and I watched "Remember Me" and I felt that he had a lot going on. He's supposed to be a super smart billionaire at a young age, 28 he says in the movie. It's intuition. I didn't know him as a person, but I'd figured from the movies that I'd seen, like "Little Ashes," that I could maybe interest him in doing something that's not "Twilight" obviously. 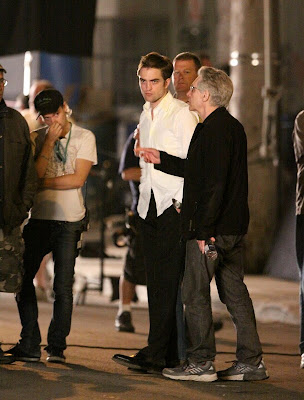 Director David Cronenberg has been busy promoting A Dangerous Method, and lucky for us he's also been talking Rob. In this interview with Gothamist he talks about why Rob was the right guy for the film, and why Twilight played a big part in him getting cast.

Viggo Mortensen, Magneto, and a movie with Rob Pattinson next, with all that Twilight hoopla around him. You don't mind stars with franchise baggage it seems. It's like with Viggo with The Lord of the Rings, frankly. We've talked about this a lot. He wouldn't have been a candidate for A History of Violence if it hadn't been for Lord of the Rings because he wasn't well-known, he was really kind of a B actor, character actor before Lord of the Rings made him a star. Therefore, he would not be somebody who could get you the financing that you need. It's something about casting that people don't think about but as a director, you really have to think about it because your producers make you think about it and so do your distributors. You say, "I want this guy," and they say "Forget it! Nobody knows who he is and we can't build a campaign around him to release to movie." So not only do you have to get the right guy, you have to figure out who that guy is creatively but he has to want to do it to, you have to be able to afford him, he has to be available at the time you want him and he has to have the star power to get your movie financed. It's very tricky casting a movie and for a director it's a huge part of what you do, to weave your way through this mine field and end up with the right guy in your movie. Because if you make a huge miscasting mistake, it can kill your movie before you've even shot a foot of film.
Have you ever made any huge casting mistakes? Yes, but I won't talk about them! [laughs] But not enough to kill the movie, I must say. There are only one or two that I would maybe have rethought. But you get lucky sometimes and sometimes the right person not only says yes and sometimes the right person says no. In other words, for some reason you've decided to go with somebody and you later realize, "Thank god that guy didn't do the movie because this guy is the right guy." But about Rob Pattinson, yeah, of course, if it weren't forTwilight I don't think we could have financed the movie around him because he wouldn't be known. But aside from that, that was a good thing not a bad thing and of course I have to think about all that.
Especially with a movie that's so focused on one character. Absolutely. You make a bad choice and you've killed your movie right away or at least you're staggering through it trying desperately to compensate for what's not there that should have been there. I felt really lucky to have Rob, he's fantastic, and I think people will see that it's obvious. I don't think it's going to be a surprise.
Cronenberg also briefly mentioned Rob in an interview with Bloomberg News:
Warner: The film stars Robert Pattinson of “The Twilight Saga” series. Do you think he can escape his vampire pigeonhole?
Cronenberg: He’s a terrific actor, which will be obvious when you see the movie. Any director who’s looking to see what he can do will see that he can do a lot.


He also talked Rob with Cinema Blend (read it all).
The director has had plenty of nice things to say about Rob recently, which only makes us want to see Cosmopolis that much more ;)