Robert Pattinson had left the Twilight Zone for a little while, and starred as a lead-actor in the movie Bel Ami. His co-stars are Uma Thurman and Christina Ricci. What a company! - vampire, serial killer and daughter from the Adams family. Scary, scary melodrama.

Damned womanizer Pattinson, clothed in the 19 century suit and a hat, looks amazingly gorgeous. This time he's playing the part of a seducer Georges Duroy, a sickly-sweet adventurer, who's trying with all his might to get into Paris' high society.

Rob: Georges doesn't differ from other people, he doesn't have a talent, he's not noteworthy, but he knows exactly what he wants.

Maybe with this new role Rob will be able to get rid of association of being a Twilight leech Cullen.

Bel Ami is a screenplay of Guy de Maupassant's novel of the same name. It demands serious approach.

Rob: When I read the script, I learned that this character is absolutely atypical to me. Basically, it's a story about the bad guy, who is ready to do bad things to achieve for the sake of his benefit.

Christina: There's an intrigue and a game in this story, just like in real life. I think, everyone can find themselves in some character.

Kristin: I like this story about the guy, who can rule the women, arrange them around himself as he see fits. I think, that's interesting enough.

There's always rumours about Robert being involved with his co-stars, after every movie's release. That was with Kristen Stewart from Twilight, and then with Reese Witherspoon after WFE. Who will the journalists marry him to this time, since he has three co-stars? We'll see. 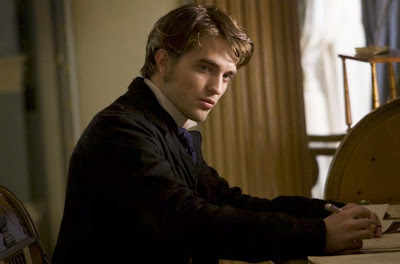 The news we have so anxiously been waiting for is finally here:

Read more at The Hollywood Reporter. Now.. if we can just get a release date... keep you posted!