In case you've missed, everything else in this post.

On The Red Carpet 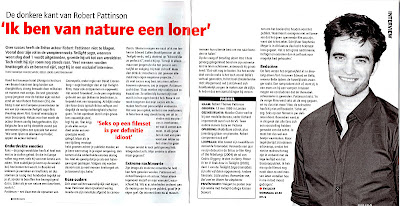 Translation via Thinking of Rob

British actor Robert Pattinson can not complain about his succes. Especially because of his role in the vampire series Twilight Saga, Part 1 – which will be broadcast wednesday (on Dutch tv), he grew into a world star. Nevertheless, he still considers his fame as strange. ”Many people go insane when they become famous,” he told us in an exclusive interview. There is a long line of fences around the luxurious L’hotel Amigo in the heart of Brussels, heavily guarded by soldiers and men with earpieces. The group of young people in front of the fences is growing rapidly. They’re all looking forward to meeting Robert Pattinson (25), who is doing a European promotional tour in honor of his latest Twilight Saga movie: Breaking Dawn Part 1 (in Dutch cinemas next Wednesday). Unfortunately for them, the actor is kept pretty occupied inside. He will only meet his Belgian fans that same evening at a special fan event. ‘Who knows, maybe they all look like Tintin’, the actor says laughing. Suppressed emotions Fans – the young world star has had to deal with them a lot. And in Europe they’re not too bad, he says knowingly. ”The further south you go on the globe, the more intense it becomes. In Brazil, everyone wants to touch and hug you, and so they’re all storming at you by the hundreds, without realizing how frightening that is. Especially if you’re a loner by nature, like me.” Pattinson – just finished with filming Cosmopolis, directed by David Cronenberg – looks more bearded then in his Twilight films, but also relaxed and cheerful. The word “brooding” is used frequently in the press to describe his looks, which is certainly not applicable. Even though demonstrating a hefty dose of typically British self-mockery, he does hide a brooding nature underneath. ”In public, I hardly ever show feelings,” he explains. ”That’s what happens when everything you do is put under a magnifying glass. But if you’ve spent some time hiding behind your public mask, and you’re back in your own environment, then all that suppressed emotions still has to be set loose. As a result you are going to behave like a nutcase. I think thats why so many people who are famous go nuts, haha. “ Angry parents That won’t take flight with him, but Pattinson does remarkably little effort to disguise his inner abyss. ”People often ask me if I recognize myself in Edward Cullen (Twilight protagonist of the series), they’re referring to” Edward who is so perfect,” he notes.” While all I see is a guy who has become prey of doubt and loathing. He hates himself. But then I think maybe that’s just all my own negative projection… “ So much success should come with a little more confidence, you might think. Pattinson sighs deeply. ”That’s what my parents get mad about as well. In their eyes I should be happy with what I have accomplished. But I will never think that my success has something to do with my personal accomplishments. It was pure luck, and it just happened to me. In fact, I am still trying to find out what exactly happened to me, and what to do with it all. In any case I am not going to hang out and relax on the beach because I have enough money now. Quite the contrary. My ambition has only grown.” Extreme nightmare His image as a modern romantic hero doesn’t mean anything to him. Pattinson wants to prove himself as an actor. ”But only to myself and my friends,” he warns. ”If you derive from the security view of the general public, you;re digging your own grave. Online numerous people are already do their best to bring me down. “ When asked if Breaking Dawn Part 1 has given him enough opportunity to show off his acting talent, he replies grinning: “That remains to be seen. After the first part of the series it has become mostly Bella’s story. In the book Edward is mainly worried and on the sidelines. So I added a few things to keep it interesting for the audience. With that I’m not saying that the film isn’t exciting, because it most certainly is. Author Stephenie Meyer gone all out in this last part. It’s one big nightmare, more violent and extreme than I ever thought possible. “ Bed scene The fans probably already know: In Breaking Dawn Part 1 Edward and Bella get married, and during the honeymoon Bella becomes pregnant. A disaster is about to unfold, as she is human and he is a vampire. Meanwhile, we may conclude that the subject of the series has become more mature. Pattinson nods. ”In the previous movies, sex was avoided, and that’s no longer the case” No, he did not invent the sex scene by himself. ”Don’t be ridiculous. Sex on a film set is by definition stupid. And on top of that you just know that in this case all the fans have formed their own idea about that scene. So you need to live up to it somewhat. But meanwhile everyone is on all over it, because it cannot be too realistic in relation to the low age of the cinema audience. I’ve never been on a filmset and been told by so many people how to behave in bed ‘ 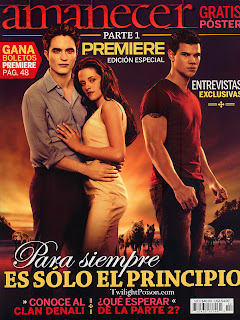