Did Rob *Really* Doodle On That New York City Table? 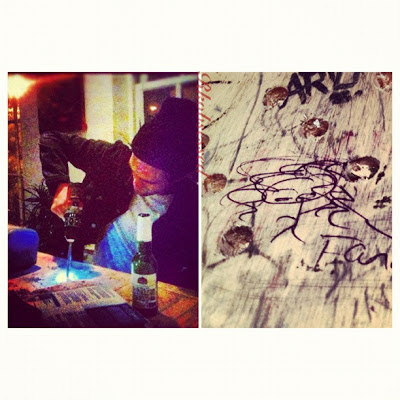 Okay, so we know when Rob was in New York City recently, he was at a bar that apparently hands patrons a drill along with their drink order. Alright, we're into it, but now there's a report Rob went beyond drilling, and actually made a doodle to complement the holes he left on the table:

"My friend said he drilled all the holes and then drew that girl-figure. He was at a party at the gallery, and my friend was there the day after and took the pic. I don't think he signed his signature!"

So we looked at it, and the comment that came with the report. It made us wonder if there's a possibility someone else could have drawn the pic in the day it took the person who took the pic to get there. We also reached out to Vale at Twilight Poison who is the expert on Rob's handwriting, and she had this to say after checking out the word scribbled on there:

It really doesn't look like Rob's at all. The letters are always too close together when he writes.

So there you have it, you decide! - we'll update you if we get a definitive answer either way.

Email ThisBlogThis!Share to TwitterShare to FacebookShare to Pinterest
Labels: All About Rob, New York City, Rumors