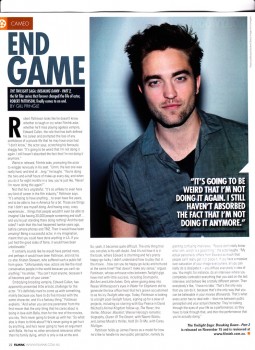 Rob's Interview on The Hype (Yahoo7)


Watch in HQ at the source

He’s one of the hottest properties in Hollywood, and today, MTV Australia was lucky enough to catch up with ‘Twilight’ star Robert Pattinson!

The 26-year-old Brit is in Australia to promote the final instalment of the hugely popular franchise, ‘Breaking Dawn – Part 2,’ which hits cinemas on November 15.

We sat down with the in-demand actor to find out how well he thought his co-star Kristen Stewart handled Bella becoming a vampire, what his favourite memories are from being on set, and where to from here!

MTV: Hi Rob! So there's a lot of anticipation from fans to finally see Bella as a vampire. How do you think Kristen handled the transition - did she do a good job?
Rob: Yeah, she was really excited about being a vampire. Everybody else who’d been pretty consistently in the movies, they’d obviously been playing a vampire like every day for ages. And so it’s funny seeing someone suddenly come into it and try and figure out their own version of the physicality and the mentality of it.

MTV: There are some amazing fight scenes in the film, what were they like to shoot?
Rob: This one was hard. I mean, we were shooting this big action sequence for about two and a half months in a massive warehouse where they normally sell cows, with a bunch of fake paper snow and green walls, and you literally started to go insane after a while! Yeah, it gets tough doing stuff like that, it gets a bit repetitive.

MTV: Looking back across the whole series, what's your favorite memory from being on set?
Rob: There’s been a few. I mean, going to Brazil on this one was pretty fun, it was pretty crazy. I crashed a speedboat which was pretty exciting! Yeah tons. Tons from the first movie, it was just so different being the first one. I mean we used to travel to set, the entire cast, in a minibus. I mean it was so entirely the opposite of what the last one ended up being - like being in helicopters and stuff.

MTV: Before you landed the role of Edward in ‘Twilight’ you had decided you were going to quit acting. Is it strange looking back at how far you've come and how much your life had changed since then?
Rob: Yeah, it is very odd. I think that a lot of actors go through the same thing, when you’ve literally gotta be just like ‘Ugh, this is pointless.’ That’s the only time you ever seem to get any jobs - you’ve gotta be at rock bottom! [laughs] But yeah, it’s funny. I was like fully, fully intending not to do it anymore, and then this came up.

MTV: So what's next on the horizon for you?
Rob: My next thing I’m doing in Australia with this guy David Michod who did ‘Animal Kingdom,’ and Guy Pearce. So yeah, that’s going to be fun. It’s a really good script and I think he’s an amazing director, so it’s exciting.

MTV: So we can expect to see you back Down Under soon then?
Rob: Yeah!

See more after the jump


Rob's Interview with The Fix

Rob's Interview With Fitzy and Wippa

Rob's Interview on The Project

Interview with Sydney Morning Herald and a New Picture: 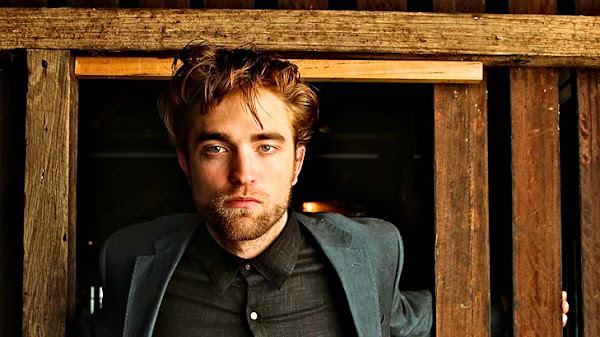 He's been Edward Cullen ever since he was Harry Potter's Cedric Diggory, but for Robert Pattinson, the actor who plays the glittery vampire hero of the Twilight movie franchise, it's been a steep learning curve.

“When you first sign on to something when you were nobody, you feel like everything's totally out of control,” he said in Sydney today.“Once you've experienced it once, you realise how to have a little bit more control over it.”

One of the things the actor would like to control is the moniker that has become attached to him through the Twilight publicity whirlwind: Rpatz. “I would like to break the hands and mouth of the person who came up with it,” he says with a chuckle.

It's only been five years since the first Twilight film hit our cinemas and the book phenomenon became a pop-culture behemoth, introducing “RPatz” and “KStew” to our worlds and adding phrases such as “Team Edward”, “Team Jacob” and “Twi-hards” to the lexicon.
Advertisement

For the actor, whose relationship with Kristen “KStew” Stewart has become inextricably linked with the films' publicity and marketing, the unique nature of the Twilight culture is partly to blame for the obsession fans have with the real-life actors.

“That's the one thing I've been annoyed about by the whole thing,” explains Pattinson. “The kind of 'team' aspect of it. It's strange. I think that's what has created a very strange atmosphere around how the movies are promoted and stuff. It's making it like a sport or something. People can't really watch the films any more because they're thinking about all this other silliness.”

This “sport” has seen every aspect of his relationship with Stewart scrutinised on the internet, from early speculation as to whether the two were genuinely an item, through to Stewart’s recent affair with her Snow White and the Huntsman director Rupert Sanders, followed by her public apology and reunion with Pattinson. Frustratingly for Pattinson, he finds it hardest not to read the internet coverage when it is at its worst.

“When you're promoting something, it's weird; it's like a strange sort of addiction. If people were whispering about you in the next room you probably want to know what they're saying, but really you'll always regret it because they're probably talking s--- about you. It's this weird thing. You only do it if you're feeling bad, and want to make yourself feel worse. If you're feeling good you never look at it.”

So is he looking at it now?

“Basically, yes,” he laughs. “I try and avoid it, because it doesn't really make any difference. I mean you think it does for a minute but everyone forgets really quick.”

Pattinson remains philosophical about questions about his relationship. “It's really not up to you, you could talk about absolutely nothing, the editor is going to put it however they want anyway. It's part of the thing where you reveal what you want to reveal and you talk about what you want to talk about. People ask you about whatever they think the audience is interested in and you can't really dictate.”

He is more bemused by the response to his other roles. “I think just because Twilight became so prominent and kind of mainstream, people think I'm similar to the character, but Edward's such a specific part. I always find it so funny when you do any other part. They're like 'this is him kind of acting now'. What did you think I was doing in Twilight?”


Robert Pattinson, in Sydney to promote Breaking Dawn Part 2, has refused to rule out the possibility of playing Edward Cullen in a Twilight spin off.

''I don't say 'definitely not' to anything - just in case,'' said the 26-year-old Brit ahead of a special fan-based event at Moore Park.

As anticipation builds for the final film in Stephenie Meyer's best-selling franchise - which opens in Australia on November 15 - Pattinson fuelled speculation that his vampire clan's domination of the international box office was not yet over.

''I keep hearing things - from the studio as well.''

About 100 lucky Twihards have scored tickets to tonight's invite-only event at Byron Kennedy Hall, run as a competition by commercial radio network Nova.

But hundreds more fans were expected to line the red carpet to catch a glimpse of the Twilight star.

The Herald Sun | Via