Premiere: Rob Talks The End of Twilight, Twitter, What's Next 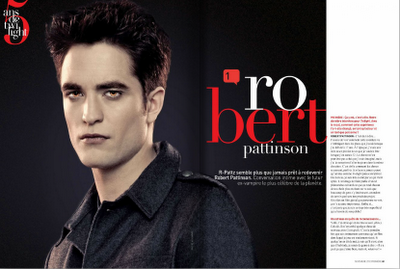 Première: This is it, it's the end. Our last interview for 'Twilight'. Looking back how did this experience changed you as an actor and as a person?

RP: It's hard to say ... I'm trying to see how this journey fits in the plans I made when I started at 17. At that time, I had a specific idea of what I wanted to be when I reached 32. The path might not be the one I imagined but I have a feeling I'm still going in the right direction. It's funny how things go, I never thought something like 'Twilight' could happen to me. In any case, I'm very excited for what's to come. The plus when you're part of such a cultural phenomenon is that it makes each of your choice more exciting because you know many people are interested in them, and are waiting to know about your next project.
If you make a great movie that nobody sees it doesn't matter. Well, no it does ... I'm just a very superficial guy who needs his audience!

Première: We're all looking for recognition..

RP: Exactly. I want people to think I'm cool (laughs.) That said, something new happened to me after 'Cosmopolis'. It was the first time I felt deeply convinced that the movie I played in was a total success. If someone would say something bad about it, I knew they were wrong. when as usual I would say: "There's this and this that I like but okay, whatever!"

Première: The problem now is you're going to suffer if your next projects don't measure up with this one.

RP: And it's not an easy task let me tell you. Nowadays, I feel like the Hollywood industry only has one goal: force you to make shit. The system turns everything it touches as a dud. Thankfully there's a small group of directors that resist but they're forced to evolve on the fringe.
It's a miracle they manage to survive. I'm thinking of guys like Harmony Korine in particular who I find extremely brilliant. He showed me his new movie 'Spring Breakers' this summer and I loved it. I don't want to jinx him but I feel like it can be a huge success.
It's with directors like him that I want to work, people who spent their life refusing to compromise no matter the price. If you look at it closely, it's often those who have the longest career. There's the safest investments on the market!

Première: You still haven't answered my first question: what changed in you at the end of those 5 years of 'Twilight'?

RP: Wasn't I talking about this right now?

Première: Unless you just turned into Hamony Korine, no....

RP: I don't think I've changed that much to be honest.

Première: How do you feel when you see a picture of you from the first 'Twilight'?

RP: I don't recognize myself. You have to know one thing, my memory only work for the last two years. I feel like I'm forgetting everything gradually, maybe because I focus a lot on the future. It might be why I didn't end up completely insane because I was thinking of what's next. I rarely analyze the past for the simplest and good reason that I don't remember it. (laughs). There's no point judging what's behind you. There will always be someone who did better than you. It's better to focus on what you're gonna do to be better than them/these people.

Première: If you could go back to 2007, what would you say to this young actor who was about to sign on for five 'Twilight'?
RP: Four at that time and in my head I was only signing for one movie because I was certain the sequels would not never get made.

Première: What advice would you give to him?

RP: None. The most important, when all is said and done, is to be able to keep the enthusiasm that pushed you into this profession, and to not land on a stage by walking backwards. So yeah, you sulk when you end up suddenly robbed from your private life. I went through a big time of depression between 23 and 25, I couldn't go where I wanted to go, I was in the tabloids every day and I didn't have access to the roles I really wanted. I wanted more, on every level. I finally realized that you needed to earn this change I so desperately wanted. That one way or another, you had to suffer to be able to make it. I thought everything was going to be served on a plate but that's not how it works. When Cronenberg offered 'Cosmopolis' to me, I never read anything as interesting for years. I saw Kristen leave to film 'Snow White and the Huntsman', Taylor was also doing his thing on the side, and I was just going in circles, asking myself if I was going to take a break and go back to music. Then one day David called and I went crazy.

Première: That's what you should tell Rob of 2007. "One day you'll work with Cronenberg. Be patient."
RP: (Laughs.) Exactly. It's a funny job, seriously. I sometime feel like I've been spending some of my career on the edge of a bridge, ready to jump, until someone held me back. I'm exaggerating of course but sometimes it's hard to evolve in an environment where everything is so uncertain.
I hate that I've waited so long to try getting meetings with directors I admire, like Harmony Korine who I mentioned earlier. I wouldn't dare approach them because I felt like I needed more experience first, but I realize today, after talking with them, that they're very open. Everyone wants to work and this little power I have now due to 'Twilight' helped me make those collaborations a reality. I have a series of projects really exciting coming up.

RP: 'Animal Kingdom' is one of the first, most stunning movie that I've seen in a while. When I met David for the tests, I really felt there was something special and his script is just genius. I've never been really good during my auditions, so I can tell you that I've prepared this one like I've never done before. It lasted no less than 3 hours and it was epic. You should have seen the number of actors who came for the casting... everyone wanted the role. When I found out I got it, I was so proud I almost opened a twitter account to list all the actors I beat. (laughs)

RP: I hope. We talked about a few projects together, one being about child stars in Hollywood. The script is really funny and dark at the same time. In any case, David knows that he only has to pick up the phone and I'll be there. I would do anything for him.

In 5 years, you went from complete unknown to a huge star. How did you take it in?

RP: Despite everything, I feel like people still don't know who I am and it's might be a good thing. Sometimes when I meet directors, they end up telling me at the end of the meeting: "This isn't what I was expecting." I hold back asking them: "What were you expecting really?" The tiny bit of success you get in this industry is exceptional and the one from 'Twilight' clearly helped me open many doors. I know that the enthusiasm can die down very easily too so I'm planning the future with caution.

Première: If everything stopped tomorrow, how would you take it?

RP: It depends on what you mean by "everything". If 'Twilight' never happened I would be trying out for the same roles I'm trying to get today. Only my chances of getting them would clearly be lower. Thankfully, the directors I dream of working with do not hire actors because their status would get them an extra budget of 5 millions. They choose you because they think you're good. Regarding popularity, that would have been awesome 12 years ago before the smart phones and TMZ. At the time of 'Titanic', Leonardo DiCaprio wasn't followed constantly by a dozen of cameras. He looked like he was having fun, hanging out with the Wu-Tang Clan... Now you can't step a foot outside without wondering which compromising picture will be published the next day. You fastly become paranoid. One time I almost threw myself on some people, convinced they were following me to take pictures... they didn't even have a camera. They weren't the fans I thought they were. (laughs.)

Première: What do you think people will think of 'Twilight' in 10 years?

RP: The saga was constantly attacked over the years, sometimes unfairly. Not that it's comparable but nobody ever reacted that violently towards the Backstreet Boys at that time (laughs)! The amount of hate thrown at 'Twilight' is unbelievable. I feel like the last chapter will be better received. It was really made for the fans, it's almost like a love letter to them. The movie is funny, very tender and doesn't unnecessarily lean on the supernatural aspect to drawn in boys or an audience that isn't his. It's why it'll be better liked. Bill Condon showed us a first rough cut back in April, right before we did some reshoots and I like the way the movie link itself with all the previous films. It comes full circle in a touching way.

Première: I meant the saga as a whole and its impact on pop culture...

RP: 'Twilight' managed to unite an audience that was unknown until now and one that studios didn't know how to capitalize on. The saga opened a road that can be fun to explore. I'm sure there's smart ways of recreating that feeling that drew fans to 'Twilight' in other people. I'm thinking about it right now, it's my audience after all!