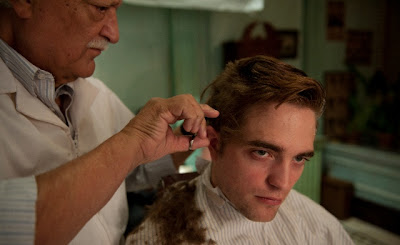 Rob talked to Interview (Germany) while promoting Cosmopolis overseas. It's a great read!

His fans were very excited when Robert Pattinson visited Berlin a few weeks ago. The actor wasn't here to promote his role of the vampire in "Twilight", but to present David Cronenberg's film adaptation of Don DeLillo's "Cosmopolis".
We spoke with the Englishman about his old and new roles and also about his best and worst moments of last year.

INTERVIEW: Mr. Pattinson, your hair has gotten longer again. You had your hair cut into a buzz cut back then. Was it for your role in "Cosmopolis" or "Bel Ami?"

ROB: Neither, it was for a movie in which I'm playing a soldier who found Sadam Hussein. The shoot was supposed to start in spring but it was postponed until fall.

INTERVIEW: Your roles left the fantasy genre and have become more realistic, do you agree?

ROB: As an actor, you just have to be very lucky to get great roles and when I like one, I'll take the opportunity. If they do get more realistic, it's either a coincidence or it happens subconsciously.

INTERVIEW: In front of the "Kino International" here in Berlin - where "Comospolis" will premiere this evening - faithful fans have been camping out since yesterday. Do you think about the possibility of scaring them off with such roles [as yours in Comospolis]? Your fans might want to see the vampire Edward Cullen instead of Eric Packer, a billionaire with an identity crisis.

ROB: I don't think that is the case. Since I shot "Bel Ami" something peculiar happened: my fans gave me my favorite books as presents. Yesterday I was in Paris and at the premiere there was a queue of people who wanted to give me books! It's incredible, isn't it?

INTERVIEW: Are you happy about the books? And do you really take them all with you?

ROB: Of course, there were really excellent books among them. Including one written by Lawrence Ferlinghetti.

INTERVIEW: Do you hope that your fans will learn something from your film adaptations?

ROB: Even if only one person among hundreds was inspired to read the corresponding book and deals with it in greater depth, it would be wonderful. Cinema can be more than pure entertainment, at least sometimes.

INTERVIEW: Is that why you said you don't want to act in teen movies anymore? I read that.

ROB: Yes, I saw that too. Someone misunderstood me or wanted to misunderstand. Who says that "Cosmopolis" wasn't a teen movie? If there is a sex or violent scene in a movie it is automatically classified as a movie for adults, regardless of what the topic is about. Such categories are completely absurd. No, I would never really say something like that!

INTERVIEW: But "Cosmopolis" isn't really a movie for young teens, is it?

ROB: Well, I wasn't easily shocked even as a teenager. And to be honest: every teenager watches hardcore-porn nowadays and probably has seen more blatant things than the stuff in our movie.

INTERVIEW: Yes, that's true. That means parents have no reasons to be apprehensive of "Cosmopolis". All the "Twilight" fans can be sent to the cinema without hesitation!

ROB: Unless the parents have something against dialogues. If they think "Oh no, I don't want my kids to deal with so many words!" then they probably should be apprehensive of our movie!

INTERVIEW: Speaking of movie ratings: you are naked in every movie of yours.

INTERVIEW: How do you feel when you have to take off your clothes on set?

ROB: I'm British. I'm always more insecure than others. Everyone is always relaxed on set, even when they shoot a nude scene. I'm always terribly tensed and anxious.

INTERVIEW: And it doesn't get better?

ROB: When I trust the director and absolutely want the movie to end up great, it has gotten easier now. But if that's not the case I'll feel like a prostitute. (laughs)

INTERVIEW: You had an excited year, what was your most amazing experience and what was the worst?

ROB: Well.. hm, there were many of both. I'd say the fact that our movie got accepted at Cannes is one of the most amazing ones. I'm very grateful for that. You know, I hoped to have a movie in competition there in maybe ten years but all of the sudden that exactly happens now. Absolutely unbelievable.

INTERVIEW: That means you didn't have a plan for your career that would directly lead you to Cannes?

ROB: You know what, ever since the first "Twilight" movie all the journalists asked me if I was afraid to only be cast for certain roles. And then the first movie I shot when I finished the Twilight Saga gets to be in competition at Cannes. That totally stunned me.

INTERVIEW: And what did you think of yourself in your first non-vampire role?

ROB: I love the movie. I think it's my best work. I've always felt uncomfortable watching myself on the big screen so far but in this case it was the total opposite.

INTERVIEW: What did you like most about your role?

ROB: This may sound a bit strange but I like how the words sound when you speak them out loud. The language, the sentences, how they are arranged - it's all beautiful.

ROB: I thought "That's my peanuts you smell" was amazing. "I believe my sexual organ is retreating into my body right now" is also very great and absurd.

INTERVIEW: Now we spoke about your best moments, but which were the worst ones then?

ROB: My dog got sick, that was very sad (laughs). But really, it was terrible! He's feeling better now, though