'Breaking Dawn' Wedding Dance: It Was All Rob & Kristen 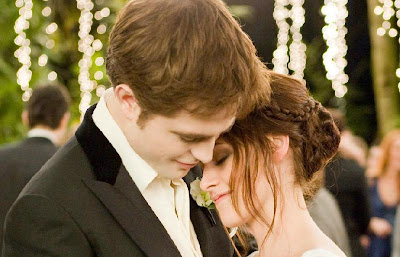 In a new interview with Broadway World, choreographer Paul Becker talks about working on Breaking Dawn with Rob and the rest of the cast:

PC: Was the dancing in TWILIGHT: BREAKING DAWN all Robert Pattinson and Kristen Stewart, specifically in the wedding scene? That 360 camera shot is so sweeping and beautifully rendered.

PB: Oh, yeah. That was all them one hundred percent. We had rehearsal with them for that scene specifically. Also, there was a Steadicam pass that we did that was actually with Jackson Rathbone and Ashley Greene dancing and they were actually doing swing dancing and flipping around and all of that stuff, believe it or not! [Laughs.] They all had fun - we all had a lot of fun on that scene. I loved working on TWILIGHT.

Becker had previously released some videos of the rehearsals with Ashley and Jackson (below) which he talks about in this interview- read the rest.

He also talked about Bella's dance with Jacob last year.