UPDATE: Summit has confirmed who will be attending Comic-Con, and now we have a time for the press conference!


Consider it official, then: Robert Pattinson and Kristen Stewart are coming to Comic-Con! Summit Entertainment announced today (July 3) that the on-screen Edward and Bella will be at the San Diego show for a "Breaking Dawn" press conference held at the Hilton Bayfront Hotel from 11:00 a.m. to 12:15 p.m. on Thursday (July 12). Start lining up now, "Twilight" fans!

Joining Pattinson and Stewart are plenty of your other favorite "Twilight" stars, including Taylor Lautner, Peter Facinelli, Nikki Reed, Jackson Rathbone, Ashley Greene and Kellan Lutz. Also along for the ride is newcomer Mackenzie Foy, starring in "Breaking Dawn" as young half-vampire Renesmee.


Was there really any question?.. yes Rob, we're feeling giddy too ;) 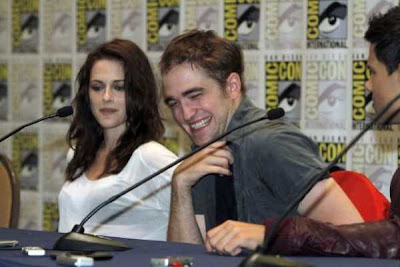 We are happy to announce that THE TWILIGHT SAGA: BREAKING DAWN – PART 2 will be the opening panel in Hall H at ComicCon® International in San Diego on Thursday, July 12, 2012. Summit Entertainment will present a sneak peek at the highly anticipated conclusion of The Twilight Saga films. This is a must-see for fans interested in the story’s final chapter, who will be shown exclusive footage from THE TWILIGHT SAGA BREAKING DAWN – PART 2 and treated to a cast and filmmaker Q&A session providing details on the epic finale.

In addition to the panel, BREAKING DAWN – PART 2 will also be present at the Summit Entertainment booth on the convention floor. Those who stop by will have the chance to attend autograph signings, participate in contests and collect free giveaways all weekend long.

We've added the map to the convention floor, and we now know that the Breaking Dawn Part 2 panel will be from 12:45-1:45 in Hall H.


We'll be bringing you updates from Comic-Con, so stay tuned for all the scoop on the new clip, first look at the Breaking Dawn Part 2 Comic-Con collectibles, and much more!