How Much Does Rob Spend On Phone Bills? You Don't Want To Know! 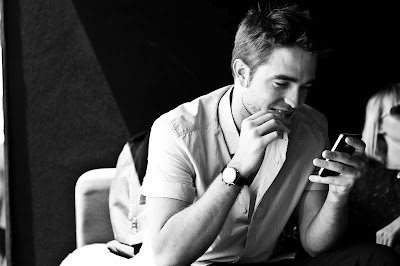 Rob talked to Online Focus while promoting Cosmopolis overseas, and he reportedly gave them these quotes:

"Acting has nothing to do with the brain, it exists for thousands of years already. And it is only since the 50s, since Lee Strasberg, that it became analytical," the 26-year-old said to FOCUS. "Actors need a voice and a face – and maybe balls," said the Briton, who lives in Hollywood.

In his new film “Cosmopolis”, on the 5th of July in the German cinemas, Pattinson embodies a multi-billion punters. Personally, the young multi-millionaire has no experience with financial investment, or fund shares.

He spends his money on "completely silly things like dog food" told Pattinson. "Or for telephone bills. I never get a European cell phone when I’m here. And then suddenly I have to pay $20,000." Keep in mind, it's not a direct quote but a translated one.. but if it's true, Rob sure loves to keep in touch ;)