The LA Times caught up with Rob just as he prepared to wrap Breaking Dawn, and he revealed just how much of a toll, his busy schedule is taking on him:

Pattinson took a moment for a brief phone interview before he was needed on the set of a night shoot for the vampire mega-hit. He seemed downright exhausted. “I'm just arriving at set, thinking I'm going to work all night,” he said. “I'm kinda losing my mind.”

But you would never be able to tell, as he proved when he was as gracious as ever with fans in New York this week. 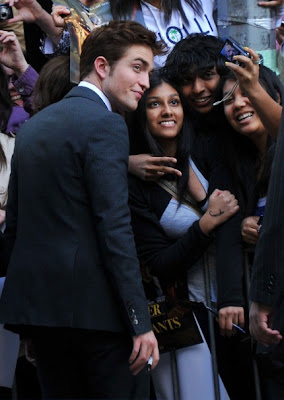 Here's hoping Rob gets a little rest this week, before he heads overseas to promote Water for Elephants. Read the rest of the interview, in which he says Reese is just being "humble" when she talks about the paparazzi effect that surrounds him.

We appreciate all your hard work Rob!