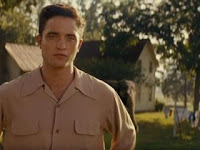 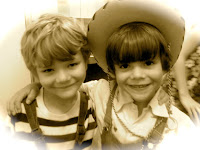 Chattanooga and its surrounding areas played a big part in Water for Elephants, when filming moved there for a few weeks last summer. Many of the gorgeous shots you see in the movie were filmed there, including one with Jacob and his family. A local TV station caught up with the boys that played Rob's sons, as they prepared to attend the Water for Elephants premiere in Chattanooga.  Read more.

Among the VIP's attending the premiere was Scott MacDonald, who plays Blackie in the film. He talked about Rob, and has THE CUTEST story to tell about Tai:

MacDonald, a veteran actor whose film and television credits include “Jack Frost” and several roles on the Star Trek television series “The Next Generation,” “Voyager” and “Deep Space Nine,” said he got a kick out watching the hundreds of fans who waited around the Sheraton Read House in hopes of seeing Pattinson. He also was impressed with Pattinson’s toughness.

“This kid took a lickin’ and kept on tickin’. He got all beat up and never complained,” he said.
One thing fans might want to watch for is a scene with Tai the elephant and MacDonald.

MacDonald’s Blackie character is the on-staff knee-breaker for the circus owner August. In the scene, Tai reaches out to Blackie with her trunk while holding some flowers in her mouth.

“I had actually worked with Tai in ‘Carnivale,’” MacDonald said. “Blackie is not a nice person and wouldn’t be playing with the elephant, but she kept reaching out to me during filming.

“I asked the trainer about it, and he said, ‘She remembers you. She’s flirting with you and doesn’t understand why you won’t play with her.’”

Read all about the premiere (more here) and watch coverage by watching both videos below. (Click on first one to watch).

Read more
Finally, a man who got to be a roustabout in Water for Elephants shared his experience of being part of the magic, and why for him it was more than a role (really a must read for fans of the book):

"We already started to get some people last year," he said. "We had people come to get their picture taken around the cage wagon that Robert Pattinson (was next to) when his arm gets grabbed by the lion."

Reat the article at the Baraboo News Republic.